Public service workers: meeting the challenge of emergencies and disasters

(26 April 2011) Emergencies and disasters are a fact of life. Climate change may increase the frequency and magnitude of some forms of natural disasters.

The International Strategy for Disaster Reduction has been in place since 2000 and encourages establishment of regional and national platforms for disaster risk reduction, comprising multi-stakeholder mechanisms. Less certain is the ability of nations and communities to plan for, prevent or lessen the damage from such events.

Public Services International, the global union federation that represents 20 million members, insists that public service workers must be consulted and involved in planning, decision-making and delivery at all levels of disaster scenarios. Public service workers are the skilled first responders in times of crisis. Emergency services, healthcare, water and energy workers risk their health and lives on the frontlines in the service of their communities.

Governments are responsible for protecting people. Investment in strong public safety regulations, well-trained and properly equipped public service workers and quality public services are key to effective disaster readiness, risk reduction, response and recovery. When proper building standards are enforced, needless injuries and deaths are avoided in times of disaster. Well-informed urban planning can reduce risks from climate crises. And a well-trained public workforce and strong emergency and health services can quickly and effectively help people during and after a crisis.

A comparison of the impact of the 2009 earthquakes in Haiti and in Chile, two developing countries in the Inter-Americas region, is instructive. In Chile, thanks in large part to public policy, strong construction regulations and public infrastructure and emergency response investments – loss of life and building damage were remarkably less than occurred in Haiti. In Haiti, where building codes and emergency services were poor – 320,000 people lost their lives and the country’s infrastructure was destroyed, even though the quake in Chile was far stronger than in Haiti.

Most recently, the 2011 earthquakes in New Zealand and Japan (and the subsequent tsunami in Japan) demonstrated that even high resource countries that are well prepared suffer damage and rely heavily on the quality of their public service infrastructure to limit the multiple harms that disasters entail.

Public Services International urges the United Nations, relevant UN entities, governments and non-governmental organizations to consult and work with trade unions globally to strengthen emergency prevention and response infrastructures at regional and national levels, and to ensure that emergency workers are well-trained and well-equipped to meet any challenge.

This call is in keeping with the World Health Organization’s January 2011 resolution on Strengthening national health emergency and disaster management capacities and resilience of health systems that urges member states to “strengthen the role of the local health workforce in the health emergency management system to provide local leadership and health services, through enhanced planning, training and access to other resources.”

Investments in public services save lives.

Of added concern is the trend to privatize public services in the wake of major disasters. Disasters should not be viewed as opportunities to profit at the expense of vulnerable populations!

In the aftermath of environmental disasters – such as in Haiti after the 2010 earthquake and in New Orleans, USA after Hurricane Katrina in 2005 - governments and financial institutions have exploited the vulnerability of local populations to privatize public services as part of “reconstruction”. Privatization can be swiftly imposed in public water, energy, health, education, construction and government administration sectors. Shamefully, such market opportunism has been applied even where voters had previously rejected privatization. Handing over public service responsibilities to private market interests has not proven to be sustainable – for either fiscal economy or effectiveness of service delivery.

In many instances, trade union rights are attacked at the same time, further weakening civil society’s ability to assert the collective interest in building quality public services for the benefit of all.

On International Workers’ Memorial Day, this 28 April 2011, PSI members, our families and communities join together to remember and mourn our sisters and brothers who have been killed or injured at work when saving the lives of others, and we pledge to continue our fight for the rights of the living.

Public Services International (PSI) is a global trade union federation that represents 20 million women and men working in the public services around the world. It has more than 600 affiliated unions in 160 countries and territories. PSI is an autonomous body, which works in association with federations covering other sectors of the workforce and with the International Trade Union Confederation (ITUC). PSI is an officially recognised non-governmental organisation for the public sector within the International Labour Organisation (ILO) and has consultative status with ECOSOC and observer status with other UN bodies such as UNCTAD and WTO.

- For the ITUC/Hazards 28 April events listing and global map
www.hazards.org/wmd/countrylistings.htm

On this day we will remember those workers which have died from occupational diseases or an accident at work. This year the focus will be on addressing exposure to hazardous
Union Rights
Apr. 28, 2010 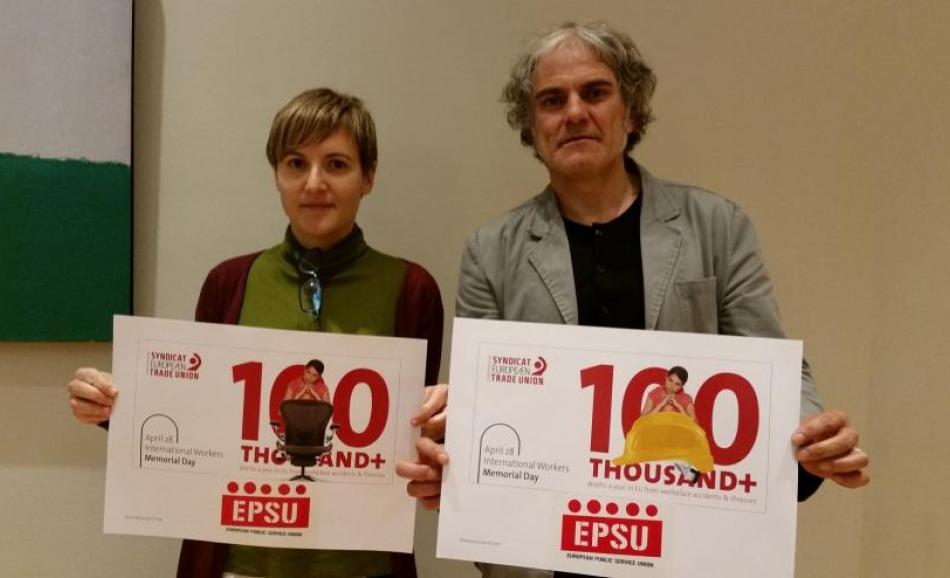 International Workers Memorial Day (28th April) is the annual day of commemoration and remembrance for the workers killed, disabled, injured or made unwell by their work. It is the occasion
Health and Safety