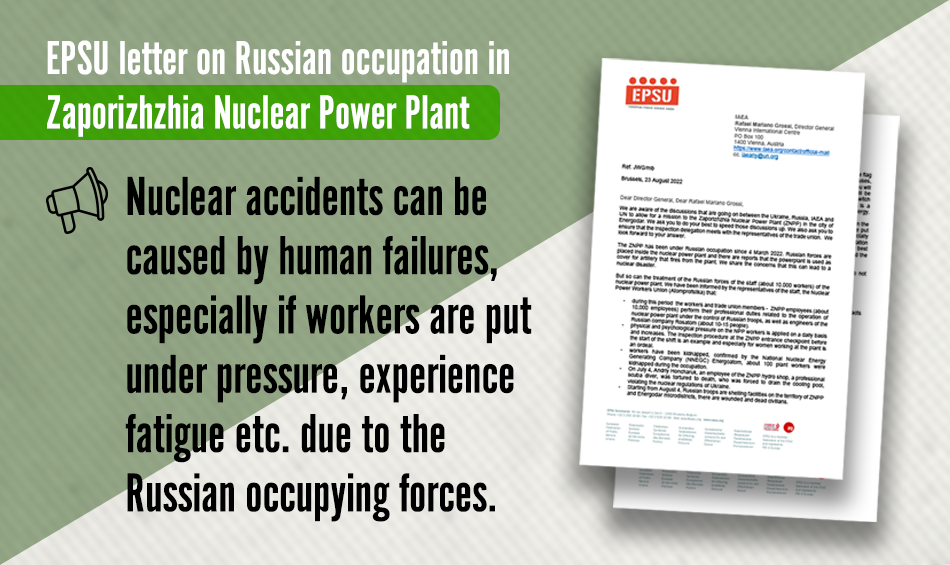 (25 August 2022) EPSU has called for an urgent safety inspection of the Zaporizhzhia Nuclear Power Plant.

Discussions are currently underway between Ukraine, Russia, International Atomic Energy Agency (IAEA) and the UN (United Nations) to allow for a mission to the nuclear plant. We call for rapid progression in these talks to allow for an essential safety visit – one that also engages with trade union representatives.

Zaporizhzhia – Europe’s largest nuclear power plant - has been under Russian occupation since 4 March 2022. There are now reports that the plant is being used as cover for artillery that fires from the plant. This has raised serious concerns about the possibility of nuclear disaster – but the conditions of those working under Russian occupation are an equally serious concern.

EPSU and the Ukrainian Nuclear Power Workers Union (Atomprofsilka) have been raising their concerns regarding Russian occupation of nuclear plants since March 2022. Since the occupation, workers have described the growing physical and psychological pressure of working under Russian troops. The National Nuclear Energy Generating Company (NNEGC) Energoatom has reported the kidnapping of around 100 plant workers and there have been reports of torture and deaths.

The trade unions representing these workers are concerned at accounts being spread by Russia which blame Ukraine for security problems being caused by this occupation. Fatigue, low morale and psychological pressure are all serious risk factors for nuclear accidents. We urge Russia, Ukraine, the IAEA and UN to prioritise the safety of these workers in any future safety visits – and to work towards a complete withdrawal of Russian soldiers from the plant.

(26 May 2015) "We want transparency" read the banner of the workers and union leaders from the nuclear power station of PAKS which they unfolded in front of the building
Energy
Feb. 19, 2009

(10 March 2009) The European Commission has submitted a Directive on improving nuclear safety in the EU. EPSU has submitted a number of amendments to MEPs to improve not only
Energy
Apr. 30, 2021
2021 EPSU Collective Bargaining News April No.9

New ETUC research reveals that safety inspections have been cut by a fifth since 2010, falling from 2.2 million annual visits to 1.7 million. Numbers fell in at least 17 countries, including in Germany where 232,000 fewer visits were made in 2018 compared to 2010 and Portugal where checks were cut in half over the same period. Over the same period the number of labour inspectors across Europe fell by more than 1000. Portugal, Malta, Cyprus, Romania and Croatia all saw inspections fall by 35%, with the average fall across the EU at 18%. The ETUC argues that the major cut in labour inspections