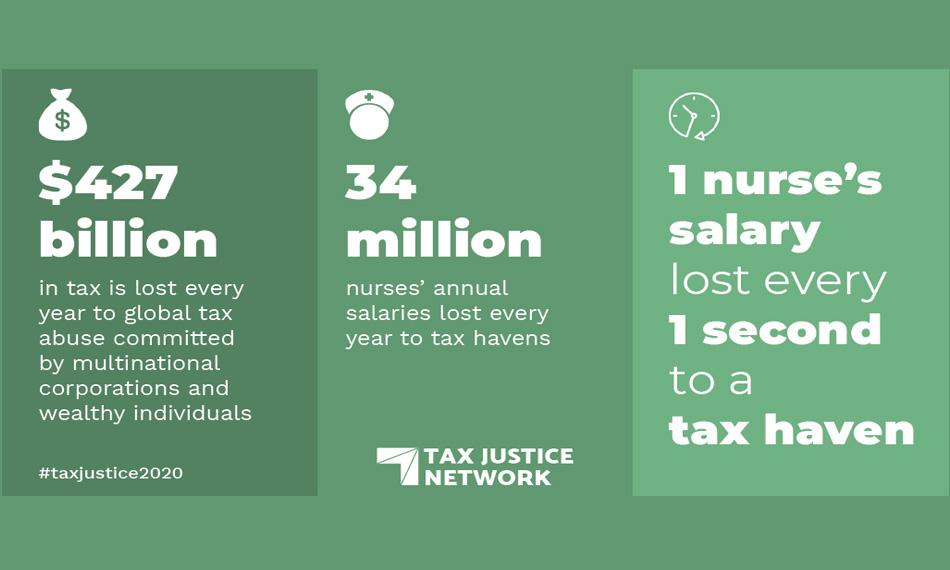 (20 November 2020)  Today, a ground-breaking study on the scope and impact of international tax avoidance has been launched by the Tax Justice Network together with Public Services International (EPSU's Global Labour Federation) and the Global Alliance for Tax Justice.

The 2020 State of Tax Justice report shows that countries are losing a total of over $427 billion in tax each year to international corporate tax abuse and private tax evasion. Altogether, this costs countries the equivalence of one nurse’s annual salary every second or nearly 34 million nurses’ annual salaries each year. Of the $427bn, $245bn are linked to multinationals using tax havens and other similar mechanisms, such as the ones EPSU denounced in the  case of McDonald's. The other $182bn is due to superrich individuals not paying their fair share.

The report shows for the first time the scale of tax avoidance in a large number of countries and highlights the top five tax offenders, including  the UK, its  territory in the Cayman islands, Luxembourg, the Netherlands and the USA. The aim is to a State of Tax Justice report every year to track the commitments of governments regarding tax avoidance.

EPSU shares the concern of MEP Paul Tang, chair of the EP FISC subcommittee, that “Some of the countries that seem responsible for most of global tax losses are not on the blacklist of the European Union. Indeed, the blacklist excludes by definition aggressive tax planning within the EU borders. At the same time, the EU’s global efforts have largely missed their target.”

‘The State of Tax Justice’ report contributes to the ongoing  debate in Europe and beyond for legislation to tax the superrich, and particularly to raise sustainable public funds to fight the Covid-19 pandemic.

It highlights once again the need for a  global approach, as well as European one, that includes: an effective sanction-based list of tax havens including those in the EU, a common consolidated corporate tax base which will also capture the digital economy, and a common minimum tax rate of 25%. Two more proposals that are currently blocked by large EU member states are public country-by-country reporting, and a tax on financial transactions. As EPSU’s members continue to struggle in the fight against the pandemic, a pay rise for frontline staff and tax justice are long overdue. EPSU renews its call to EU governments, in particular to the German government,  to stop blocking progressive tax justice proposals.

The report can be found here in French, Spanish and English.

(28 January 2016) Today’s new Anti-Tax Avoidance Package (ATAP) will potentially contribute to making multinational companies pay more tax, but not yet all the tax they owe. The lengthy package consists of two directives. One implements the OECD’s BEPS action plan at EU level, to pave the way for a
Tax justice
Sep. 18, 2014

OECD Reports on Tax Avoidance: encouraging progress, but more to be done

(18 September 2014) On 16 September, the OECD released a first batch of reports and recommendations on the Base Erosion and Profit Shifting (BEPS) Action Plan, covering 7 action points of the Plan (out of a total of 15) - [see reports & recommendations here->http://www.oecd.org/tax/oecd-releases
Tax justice