Health and care workers take to the streets to demand change 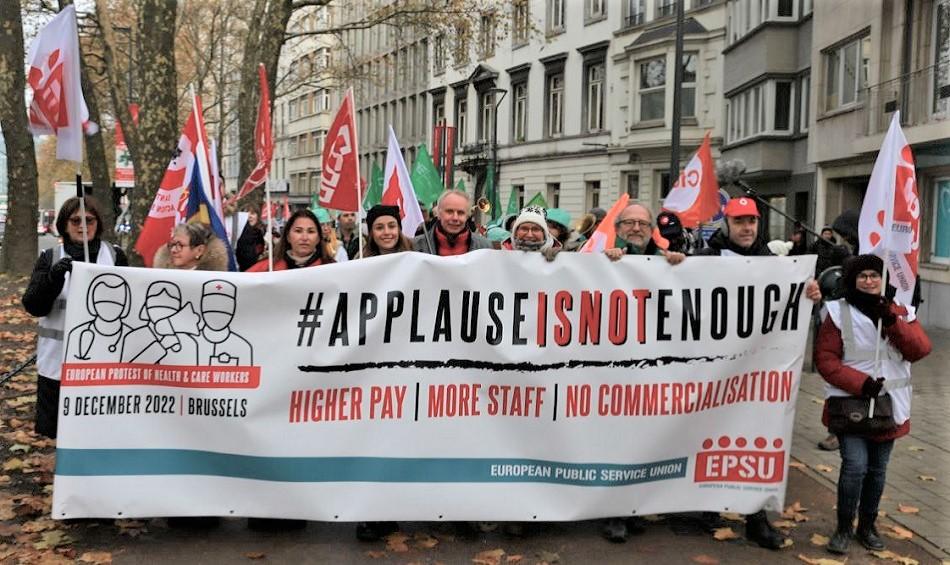 EPSU action on 9 December in Brussels

(9 December 2022) As Europe’s health ministers gathered for a European Council meeting on health, workers from across the continent marched in Brussels to call for action.

The protest was organised by EPSU, the representative European trade union organisation for health and care. Representatives from unions from Romania, Spain, Italy, France, Belgium, Germany and beyond marched through freezing cold weather from Place Madou to Rond-Point Schuman, where health ministers from the EU’s 27 Member States were meeting for the health configuration of the EU Employment, Social Policy, Health and Consumer Affairs Council.

The day was just one more in a wave of actions in health and care that has swept Europe. From the UK to Georgia, workers have been calling for better pay, safe staffing and an end to the commercialisation of care. Delegations also met with health representatives from the Czech Presidency of the EU and European Commissioner for Jobs and Social Rights Nicolas Schmit – though Commissioner for Health Stella Kyriakides. The issues that workers faced three years ago and during the pandemic – but nothing has changed. With the applause of the pandemic now a distant memory, the protesters made their message very clear: applause is not enough.

Read more about their demands here.

For photos of the action

Firefighters take protests to the streets

Belgian firefighters clashed with police on the streets of Brussels as they protested their demands for improved pay and conditions and proper recognition of their work as a dangerous profession. Read more at > Euronews (EN)

Unions take to streets over deregulation of social care

Unions are concerned that planned legislation on 24-hour care will lead to unqualified and underpaid workers looking after the sick and elderly. The unions argue that mistakes are inevitable if untrained workers are entrusted with medical care and that in the worst case these mistakes could be fatal. The unions have organised a march to and demonstration outside the health ministry building in Vienna no 11 March. [Read more at > GDG (DE)->http://www.gdg.at/servlet/ContentServer?pagename=C01/Page/Index&n=C01_0.b.a&cid=1204494039850] [And at > GPA-DJP (DE)->http://www.gpa.at/servlet

GREECE - national and local government workers take to the streets

The Greek civil service union ADEDY organised a four-hour stoppage on Friday 24 June while the local government workers' union POE-OTA are taking action today. Both organisations are protesting at government plans to reform the social security system. The ADEDY action was called to coincide with action in the private sector where the banking unions in particular are campaigning against the imposition of later retirement. Read more at > ERT news website