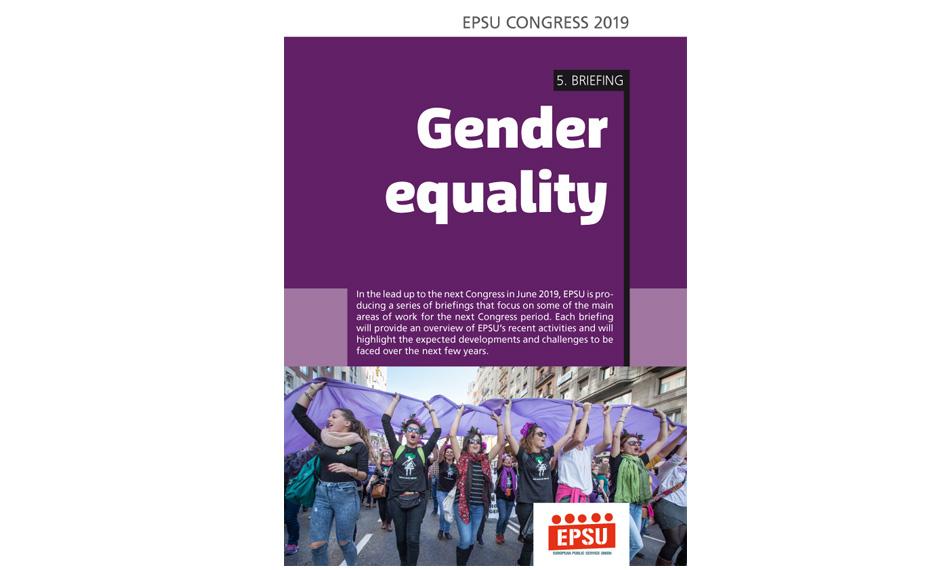 (19 February 2019) Gender equality is absolutely central to EPSU’s work as we fight to defend public services for the millions of women who rely on them and to tackle inequality faced by women working in different  services. In sectors such as eldercare and childcare jobs are  predominantly done by women and they have been seriously and unjustifiably undervalued for many years

This congress briefing explores how EPSU and its affiliates have focused on the need to reduce the gender pay gap as well as the other manifestations of gender equality in pensions and employment. It gives examples of our initiatives in recent years which we know need to be continued and strengthened over the next Congress period.

For the previous briefings:

The Gender Equality section of our Congress will focus on: Item 9) Resolution R.3. “Equal Pay” – the resolution recognises that: the gender pay gap still exists more than 50 years after the EU introduced the principle of equal pay for equal work between women and men and notes the main causes of the
Equality
Apr. 25, 2016
11-2007 epsucob@NEWS 12 June 2007

No progress after fifth bargaining round in hospitals

Health sector unions - FNV Abvakabo, CNV Publieke Zaak and NU'91 - report no further progress towards a new collective agreement after the fifth round of negotiations in the hospital sector. The unions believe that they have come up with a number of positive proposals in terms of shifting flexible workers to permanent contracts, in relation to working hours and on initiatives on training to improve employability. In response, the employers only seem interested in getting rid of the redundancy scheme. The next round of bargaining is on 11 June. [Read common press release at > FNV Abvakabo (NL)-
S