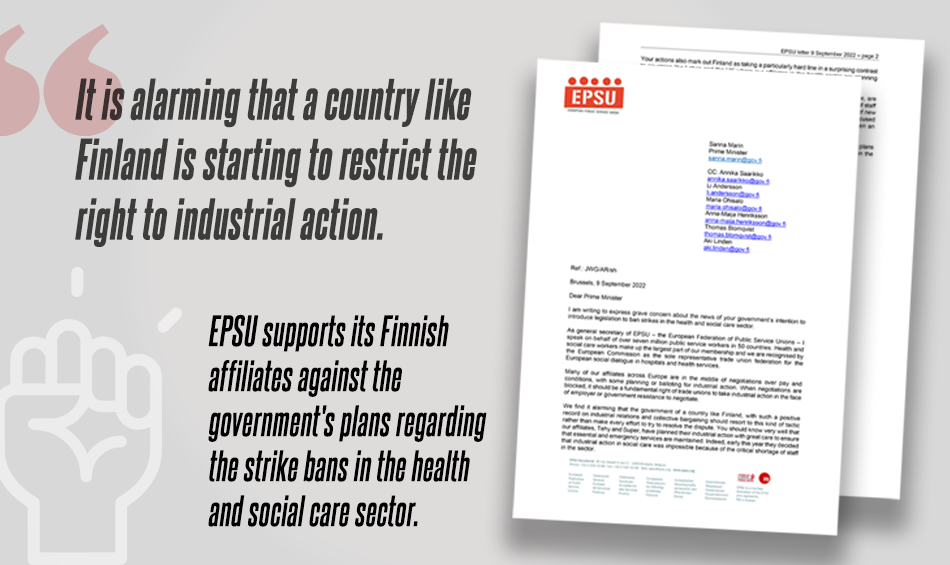 (12 September) EPSU has sent a message of solidarity to nurses' unions in Finland in the face of the government’s threat to ban strikes in health and social care. The federation has also written to the Finnish prime minister urging her to withdraw this unacceptable threat to the right to strike.

Tehy and SuPer, have been involved in a long-running dispute with municipal employers over pay and conditions. The two unions have a long-term plan to increase pay for nursing staff in response to the critical shortage of workers across the sector. However, employers have rejected their claim and following a summer of industrial action in the form of bans on overtime and shift changes, Tehy and SuPer recently announced a series of strikes targeting a range of health facilities across the country.

As always, both unions have taken all the necessary steps to ensure patient safety and the maintenance of essential and emergency services.

Rather than intervene to help provide a long-term solution to the staffing crisis, the government has responded by putting forward legislation that would give employers in health and social care the right to unilaterally determine whether strike action can go head. The two unions point out legislation already exists to allow the government to intercede where industrial action poses a threat to citizens’ safety and that it is unacceptable that it now wants to go further to impose restrictions specifically on health and social care.

EPSU has written to the Finnish government, calling on it to withdraw the proposed strike ban and to work with the trade unions and employers to resolve the dispute and develop a sustainable, long-term strategy to improve pay and tackle the staffing crisis.

EPSU General Secretary Jan Willem Goudriaan said: “It is very disappointing that we see the approach taken by the government of Finland, a country which otherwise has a very positive record on industrial relations and collective bargaining. It marks a surprising contrast with countries like the UK and Latvia where EPSU affiliates in health and social care are currently are planning strike action and are free to do so under the rules of those countries.”

He added: “We will continue to support Tehy and SuPer both in their current industrial action and in their resistance to the introduction to the new law. It will be a shame that this action will tarnish Finland’s reputation shortly before next week’s conference on trade union rights in the public services.”

Union sets off on strike bus to mobilise health workers

The vpod/ssp public services union has launched an initiative to support its local activists in mobilising to win better pay and conditions for health workers across the country. The strike at the CHUV University Hospital in Lausanne was the starting signal for the union’s “Road to Strike” organizing campaign. Vpod/ssp argues that the situation in health establishments has worsened due to the pandemic with many workers facing burnout and leaving the sector. The persistent staffing shortages undermine working conditions and further pressures come from private health companies’ search for profit

The TEHY and SuPer nurses’ unions are stepping up their campaign of industrial action to secure a better pay offer from the municipal employers. The two unions have maintained an ban on overtime and shift changes since before the summer but have now tightened up those restrictions and also announced a series of strike actions beginning with a one-day stoppage in Kanta-Häme in the South West on 2 September. So far three further strikes – each of four days – have been declared in Turku, Helsinki and Oulu with two running from 6-9 September and the Oulu action running from 13 to 16 September. The