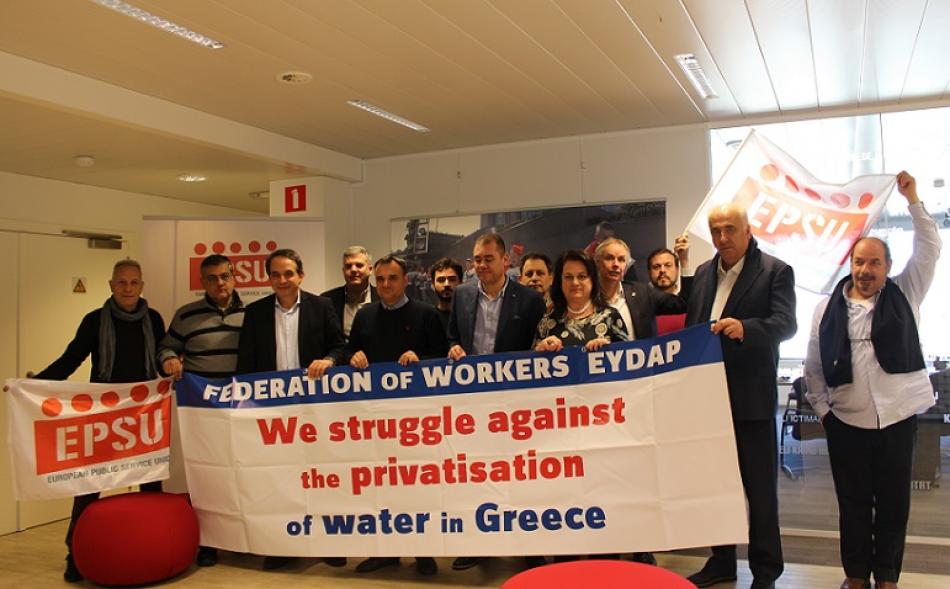 (26 February 2018) On Thursday the 22nd of February a group of trade unionists including the president and vice president of EYDAP visited the European Public Service Union (EPSU) to discuss the struggles they are facing with the water privatisation in Greece.

EPSU affiliated trade unions in Greece have been campaigning on the sell out of state properties. The visit to Brussels was part of their effort to build solidarity and raise awareness on their issue.

The purpose of the Hellenic Corporation of Assets and Participations (HCAP) is to collect under a single structure the assets of the Greek State, including participations in Public Enterprises of strategic importance, and to promote new standards, by exploiting the opportunities of current times, which will lead to the reform of their management framework, for the benefit of the public interest.

On the basis of common values and recognizing the importance of the Public Enterprises to support economic recovery, but also the need for better response to the challenges of a demanding economic environment, while improving the services provided to citizens and Greek businesses.

On the same day, EPSU organized a screening of Up to the Last drop a film by YORGOS AVGEROPOULOS that exposes the secret water war in Europe and addresses the issues of water privatization.

(10 June 2013) EYATh, the water workers union from Thessaloniki thanks EPSU for our support to their fight against privatisation of the Greek water utilities. See the website in Greek
Water
Nov. 09, 2007

(November 2007) The mayor of Paris will defend the return of the concessions to a public company. The concessions are run by Veolia and Suez. Not only abroad but also
Water
Jun. 13, 2013

(13 June 2013) A combination of opposing privatisation and putting forward practical alternatives is helping water campaigners mount an effective challenge to austerity in Greece. Privatisation and the nature of
Water