(10 June 2013) EYATh, the water workers union from Thessaloniki thanks EPSU for our support to their fight against privatisation of the Greek water utilities. [see the website in Greek->http://seeyath.blogspot.gr/2013/06/epsu.html] EPSU stands with the Greek unions and citizens, because privatisation of water will only increase suffering for the Greek people and will make that the borrowed EU money will leave Greece again as profits for the foreign owner of the water company, once it is privatised. The banner reads:
SOSte to NERO (SOS the WATER)
it is a public common
No to privatisation of water
No to selling of EYATH
Referendum now 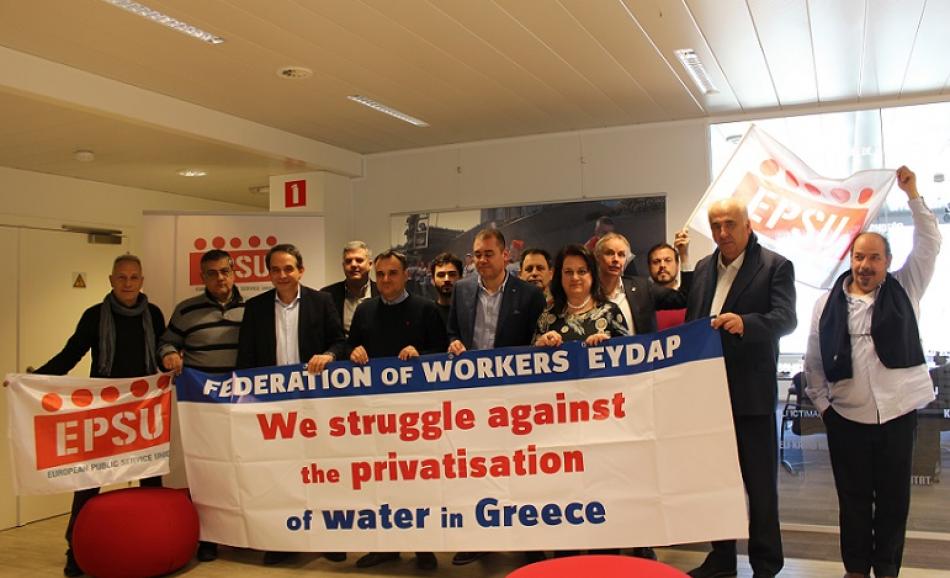 On Thursday the 22nd of February a group of trade unionists including the president and vice president of EYDAP visited the European Public Service Union (EPSU) to discuss the struggles they are facing with the water privatisation in Greece.

(23 January 2014) The Thessaloniki water company EYATH is threatened with privatisation, much like the Athens company EYAD. The privatisations are part of the Troika imposed austerity programme and heartily supported by the [Eurozone group of ministers->http://www.epsu.org/a/10063]. On the occasion
Water
Apr. 25, 2016

How to fight water privatisation ?

EPSU, PSI as well as PSIRU ([www.psiru.org->www.psiru.org]) provide much information that can assist your union and its local branches as well as community and other social action groups to fight the privatisation of water and waste water treatment facilities. Many other organisations do assist as
Water