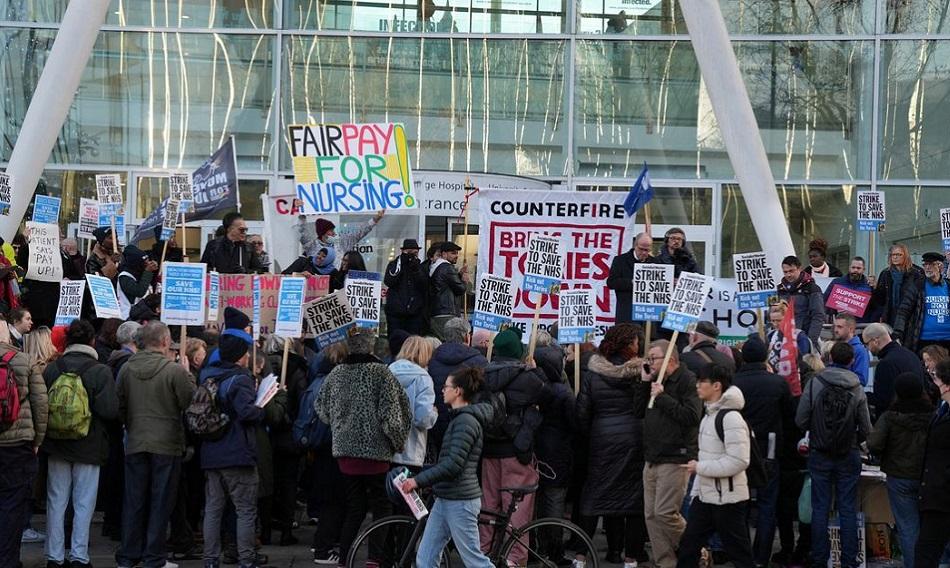 Instead of making serious attempts to negotiate settlements to the current disputes about pay and other conditions in health services, central government, railways and education, the Conservative government is rushing through a new law that will impose minimum service levels in these sectors, including the possibility that strikers will be sacked if they fail to require with notices to work.

Livia Spera, General Secretary of the European Transport Workers’ Federation declares “Railway unions have been taking industrial action about pay, job cuts and changes to terms and conditions. Decades of rail privatisation have not only jeopardised working conditions, but also the quality, safety and frequency of rail service across UK. This explains why the recent wave of strikes have been widely supported by UK citizens. Instead of tackling the root causes of this massive protest and proceed with renationalising the rail system, the UK government has decided to hinder a fundamental trade union right. This is a battle for democracy, and we will fully support it, we are fully behind our UK trade unions.”

Susan Flocken, ETUCE European Director says “In comparison to other countries in Europe, the UK has got already some of the most restrictive rights to strike. Instead of further limiting trade unions in their right to call for industrial action, the UK government should move to increase its investment in the education sector for better pay, pension and working conditions of teachers, academics and other education personnel. Education staff deserve a pay rise above the inflation rate.

ETUCE stands in solidarity with its member organisations across the UK who are calling on the authorities to truly recognise the value and enhance the status of the teaching profession.”

Jan Willem Goudriaan, General secretary of the EPSU public services federation states “The UK government claims that it is bringing the UK into line with strike law in other countries. This is total nonsense. This ignores the fact that the UK is a complete outlier in the excessive rules on ballots and voting thresholds that it has imposed on public service workers. It is also ignoring that in countries like Italy or Spain, that it chooses as comparisons, guarantee a right to strike in their constitutions and a right to negotiate minimum service levels rather than have them imposed.”

EPSU, the EFT and ETUCE strongly support their UK affiliates in their current campaigns of strike action to secure better pay and conditions for public service workers. Pay rises that are urgently required in response to the cost-of-living crisis and long deserved after years of pay falling behind inflation.

The three federations also send their solidarity to the day of action on 1 February called by the TUC which will see many protests around the country along with strike action coordinated across the public services.

EPSU is the European Federation of Public Service Unions

ETUCE is the European Trade Union Committee for Education

ETF is the European Federation of Transport Workers Unions

European trade unions federations on the anti-strike legislation in the UK – bin it !

The European Trade Union Federations (ETUFs) representing tens of millions of workers across all countries and sectors in the EU and beyond in Europe strongly condemn the UK government’s draft legislation on minimum service.
Solidarity
Strike
Nov. 05, 2019
2019 November EPSU Collective Bargaining News 21

Workers at the Schildautal hospital in Seesen in Lower Saxony are continuing their strike action to secure a collective agreement despite management's aggressive anti-strike measures (see EPSU Collective Bargaining News 19, October). Public services union ver.di has condemned the hospital owners, Askeplios, for failing to agree a minimum service agreement, threatening workers with the sack and offering strike-breaking bonuses. Further action was taken on 1 November despite the employer's intimidation and on the basis of the union's own proposal for minimum service.

The TEHY and SuPer nurses’ trade unions have condemned the new law that imposes tougher requirements on industrial action in the care sector. Despite the law, further action as part of the unions’ continuing campaign to secure higher pay took place on 27 September and the unions are determined to pursue their claims with SuPer considering declaring mass resignations in home care. The unions also point out that existing legislation already regulated strike action and so the new law imposes a further burden that targets the care sector specifically. They also argue that, in contrast to the rules