Public sector pay has been a matter of concern for the European Central Bank (ECB) for some time with former President Jean-Claude Trichet making several public statements on the issue. In this speech given in Liège in February 2011, he argued that "public sector wages are much more important for competitiveness than is generally realised."

To illustrate his points he provides a range of data including the following: "Between 1999 and 2009, public sector wages in the euro area grew by close to 40%. In Germany, they grew by 19%; in Ireland and in Greece, they grew by more than 100%, roughly 50 percentage points more than private sector wages." However, rather than try to analyse the data in more detail he avoids the question by claiming that these are only "stylised" facts for "illustrative" purposes.

The source for the data was apparently the Organisation for Economic Co-operation and Development (OECD) but Trichet might have conceded that international sources of statistics on pay are open to challenge and if he had waited until later in the year he would have found different figures quoted in a working paper published by the ECB itself. According to this report public sector pay in Greece increased by 50.2% between 1999 and 2007, just ahead of private sector pay at 46.5%. The figures for Ireland are also well below 100% at 64.0% for the public sector. Certainly ahead of the 56.2% recorded in the private sector but well below the 50% gap claimed by Trichet.

Although these figures contradict the former ECB president the working paper in which they appear does fit with the ECB strategy calling for wage moderation in the public sector. The paper focuses on the pay gap between public and private sectors, highlighting in particular that the effective pay premium for public sector workers is higher in Greece, Ireland, Italy, Portugal and Spain than in other countries (in this case Austria, Belgium, Germany, France and Slovenia). Appropriately, more propaganda to justify the cuts in public sector pay that have been imposed in all five of these countries.

The study says that it takes account of the differences between the public and private sectors, notably the tendency for public sector to be older and better educated than in the private sector. It also notes that the wage premium tends to be higher for women workers and larger at the lower end of the pay scale.

The authors of the working paper include several reservations about their conclusions related to the reliability of data and the extent of comparability across sectors. They also miss the opportunity to look in more detail at Ireland, the one country, where benchmarking exercises have been carried out (in 2002 and 2007) specifically to compare work, pay and benefits in the public and private sectors.

Earlier working papers from the ECB investigate other aspects of public and private sector pay and particularly the extent of any link in terms of wage trends. The argument from the ECB has been that public sector pay has a major influence over private sector pay and therefore can be a key instrument in a government's attempts to achieve wage moderation. The conclusions of an ECB working paper from 2008 contradict this assumption and talks, depending on the analysis, of a "dominant pattern of private sector leadership" or at least common trends where pay tends to follow prices.

Similarly an ECB occasional paper from June 2010 says at one point: "For the most
part, private sector wages seem to exert a stronger influence on public wages than vice versa." However, this observation does not prevent the authors from going on to talk about the importance of wage moderation in the public sector! 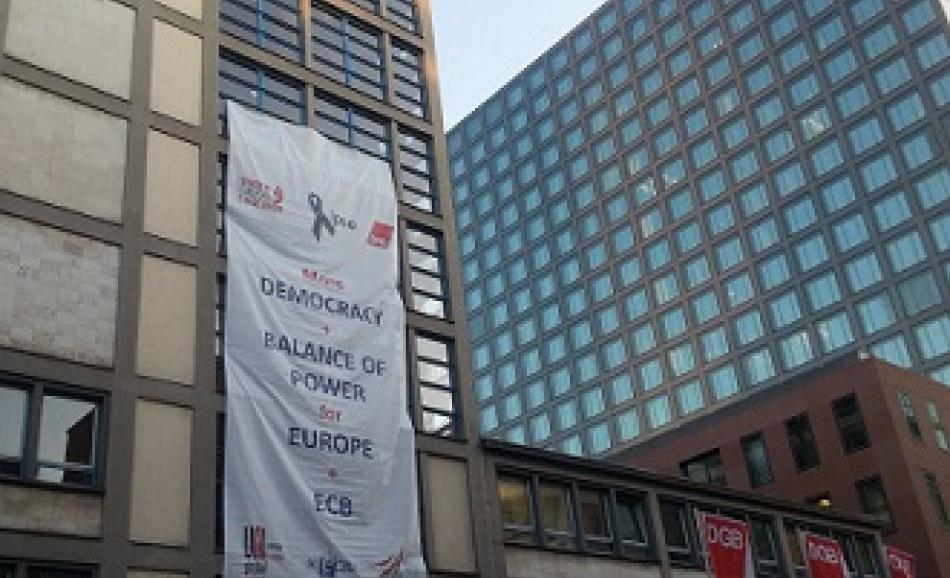 (17 March 2015) On the occasion of the inauguration of the new head office of the European Central Bank, trade unions are demanding more democracy and an end to austerity
Collective Bargaining
Jun. 01, 2012

On 30 May, the Commission published a series of policy recommendations for member states, many of which have implications for wages and wage determination systems. In the framework of economic
Collective Bargaining
Nov. 12, 2005
epsucob@NEWS 12 November 2005

The ETUC has argued that the European Central Bank should take action to boost the European economy rather than be too concerned about the potential impact of increasing oil prices on inflation. The ETUC notes the modest fall in pay settlements across Europe over the last four years and argues for measures to boost domestic demand. Read more at > ETUC