On April 30 at the Europa Hall of the Confederation of Independent Trade Unions of Bulgaria (CITUB) the 21st Century Youth Forum, organized by CITUB, ITUC and Friedrich Ebert Foundation, took place as a part of CITUB 8th Congress is Sofia, Bulgaria. Around 100 young participants from both Bulgarian and international unions and youth organizations were taking part in the forum, including the representative of EPSU Youth Network. Numerous speakers, including president of CITUB Plamen Dimitrov, Bulgarian Minister of Labour and Social policy Galab Donev, PERC Youth Committee president Tatiana Marian and others addressed the forum and discussed several relevant issues, such as digitalization of work, employment-education transition policies, protection of social rights and decent work.

CITUB President Plamen Dimitrov welcomed participants with introductory remarks related to the situation in Bulgaria and Eastern Europe, stating that there is need to develop not just norms, but also policies related to the minimum income and other minimum benefits.

The Minister of Labour and Social Policies Galab Donev also welcomed the audience, announced his support for the unions’ activity and presented his view on current trend of digitalization and its impact on cutting jobs, unknown transformations of the labor market and forced re-qualification of the workers.

“Digitalization: profit or advancement of society?”

During the high-level panel discussion on digitalization, speakers discussed the challenges that the world, labor markets and societal structure face because of the rapid development of digital services. While Bulgaria and other eastern EU countries has known to have a fastest broadband connection, in terms of IT technologies and e-commerce these countries still lag behind the rest of EU, US and Asia. However, in USA and EU, respectively 47% and 54% of today’s jobs can be replaced by machines in coming decades.
While it was noted that we should not afraid of digitalization, the important question to understand if these services created for just profit, or for advancement of society. Particularly some questions were raised, such as:

Uber, Airbnb, 3D printing, Internet of Things – these phenomena tend to not only create precarious sector, but also does major transformation of cities, transportation, construction and other industries. In the world where people are being replaced by robots, products become virtual, major industries migrate to non-regulated B2B and P2P marketplaces, union activists and experts propose a new approach to be developed, such as new forms of taxes and regulations should be implemented. And the regulations are the role of the state, not a matter of political debates between left and right. As noted by Plamen Dimitrov, the digitalization should not be about cheap labor or easier labor relationships, but it should be about quality of job.

“Political literacy is a key”

During other panel talks Ida Sorensen, Member of Danish National Youth Council, presented a glimpse of good practices in education-employment transition policies of Denmark, after which the participants heard a popular lecture on so-called “lumpenproletariat” class, which was very timely, considering the current geo-political situation in the world.

Panel on protection of social rights highlighted the importance of political literacy of the workers and society in general, as necessary tool for raising their voice on social matters in rapidly changing and manipulative environment. A hot debate fired up on controversial “IT sector workers” topic, which is directly related to digitalization. Startups and IT companies as portrayed as fancy offices, where workers get higher-than-median salaries, having good conditions and well-being and “satisfied” with their lives. These workers rarely even want to be in union. Forum participants were debating if the unions should care about people who do not want unions. There was a rhetorical question asking if does it have a point to unionize those who are not interested, and is it even “healthy” phenomenon to be happy with the work on a level to reject a union?

Along with Youth Forum, the young representatives cordially visited an exhibition of caricature cartoons on the topic of “Future of Labor”, took part in 8th Congress of CITUB as international guests, as well as participated in the conference “Digitalization and the future of work: challenges and solutions”.

(December 2010) The first youth seminar organised by European Federation of Public Services Unions (EPSU) affiliates since the Executive Committee decided to establish a Youth network took place in Sofia
May. 19, 2015 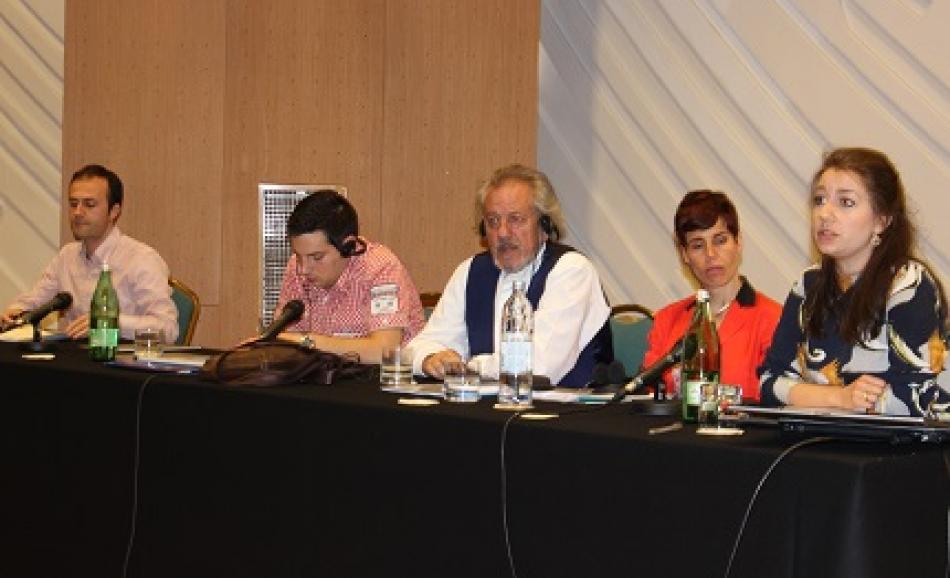 12th May marks International Nurses Day, a day to celebrate the work of nurses around the world. But recognition of their role in our societies must not be reduced to symbolic gestures.
Health
Quality employment
Solidarity