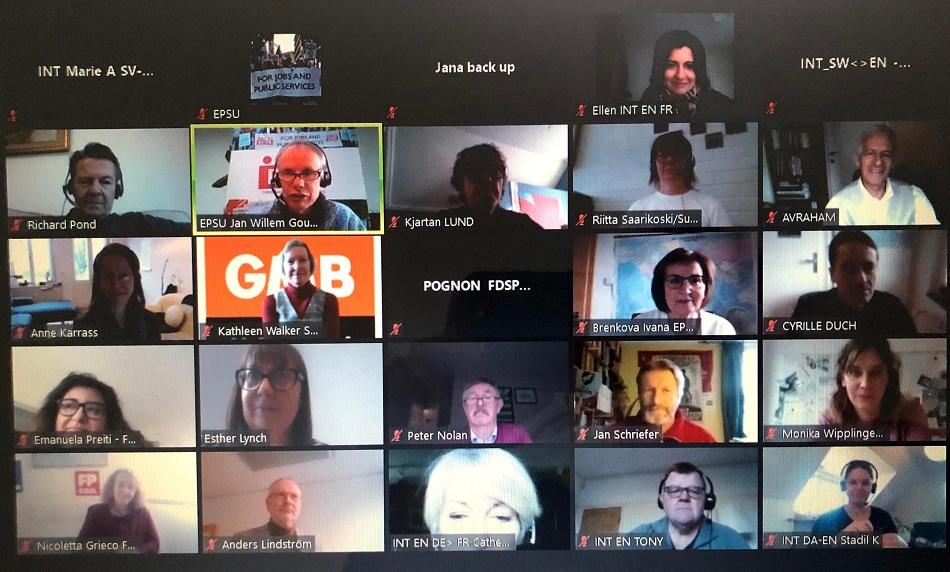 (13 January 2021) Thirty-six representatives of EPSU affiliates from 17 countries took part in an online working group on 12 January to discuss the European Commission’s draft directive on adequate minimum wages. This was the third working group meeting following the launch of the Commission’s initiative in January 2020.

ETUC deputy general secretary Esther Lynch presented the ETUC’s assessment of the draft directive stressing the importance of the European Commission recognising that recent trends in stagnating minimum wages and increasing in workplace poverty required action at European level. This, in Esther’s view, is a vital argument against claims that the draft directive infringes subsidiarity principles.

She went on to make clear that the ETUC had welcomed the draft directive in the face of strong opposition from employers. However, big changes were needed to make the directive something that the ETUC could fully support – not least in relation to setting a specific minimum threshold for national minimum wages; more concrete measures to promote collective bargaining and rules to safeguard existing and effective systems of collective bargaining.

The ETUC’s main priorities for amendments to the directive included:

Esther explained that while the European Commission has confirmed that the legal basis of the directive was article 153 on working conditions, Member States had asked the legal services of the European Council to provide an opinion. There was a possibility that the Council would highlight Article 4 on collective bargaining and argue that the legal basis should be “defence of collective interests”. If this were the case, then the vote on the directive would require unanimity which, on the basis of clear opposition from some Member States would spell the end of the directive.

There were questions and comments from participants from Sweden, Ireland and Germany. Esther responded to the points noting that the ETUC was very aware that the directive in its current form did not provide adequate safeguards for collective bargaining systems. She underlined that this was of concern for all collective bargaining systems and not just those in Scandinavian countries. Esther focused on the importance of strengthening Article 4 with provisions to prevent union-busting and suggested there might be scope here to refer to ILO conventions and the charter of social rights.

The ETUC was positive about the crucial role that will be played by the current Portuguese Presidency but Esther stressed that this meant trying to achieve as much progress as possible in the first half of the year.

There was some discussion about shifting the European legal position on collective bargaining through implementation of a social progress protocol or the bringing of EU institutions into the remit of the European Convention of Human Rights. Esther suggested that both required a significant shift in approach and effort from the European trade union movement and it was an issue that could be taken up at the ETUC mid-term conference, if affiliates pushed for it.

Esther underlined the ETUC’s determination to use public procurement rules to promote collective bargaining and not just require that employers complied with basic requirements on pay. They were working on this with legal advisors and proposals would be discussed in a webinar on 22 January and participants were encouraged to register for the meeting. She also said that they were continuing to highlight cases of union-busting and anti-trade union activity that there would be a second webinar on this issue in February.

EPSU general secretary Jan Willem Goudriaan thanked Esther for her contribution and urged affiliates to work with their confederations in the campaign to secure the necessary changes to the directive. He stressed that making progress here, as with other areas of trade union rights, required a determined effort on the part of the trade union movement.

The European Parliament has voted to begin the three-way negotiations with the European Council and Commission on the Adequate Minimum Wages Directive on the basis of the report supported by the Parliament’s Employment Committee on 11 November. The ETUC has called on the European Council to agree its general approach (vote likely on 6 December) so that the negotiations can begin as soon as possible. It argues that urgent action is needed to support the 9.5 million people across Europe struggling to pay their energy and other bills. The ETUC has also reiterated its demand that the directive

The ETUC wants to get down to work on the minimum wage directive following the long-awaited opinion from the EU Council's legal service. The opinion confirms what the ETUC has been arguing all along that a directive is possible and legally based on the protection of working conditions (Article 153(1)(b) TFEU in conjunction with Article 153(2) TFEU). The ETUC is now calling on governments to deliver and work towards a directive that will make it possible “for workers on minimum wages to make ends meet, to pay the rent, to put food on the table for them and their families.” The ETUC added: “The