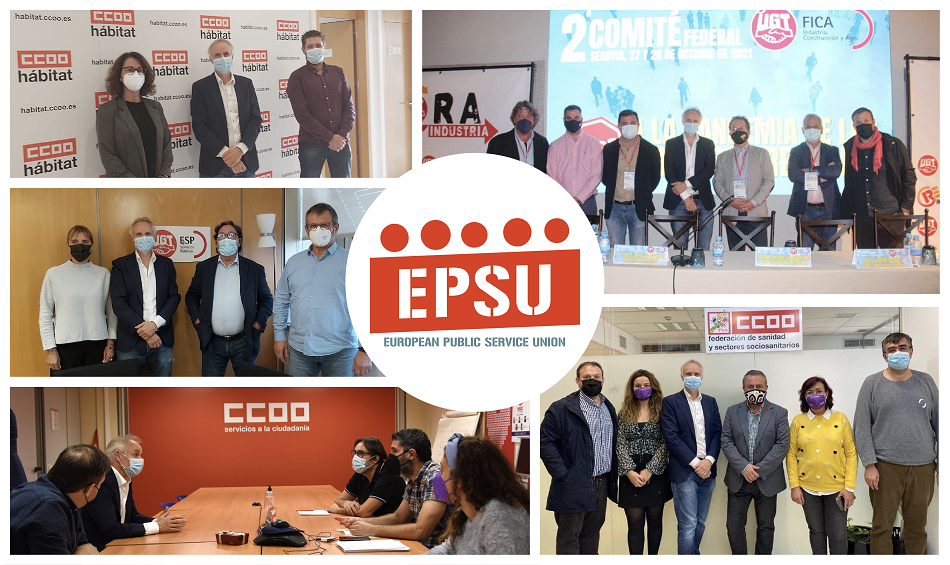 (4 November 2021) On 26-27 October the General Secretary of the European Federation of Public Service Unions (EPSU), Jan Willem Goudriaan, visited Madrid to meet with the leadership of the affiliated organisations in Spain, several of which have newly elected leadership following their federal congresses.

The meetings covered a range of issues including the need to break with austerity, the possible reform of labour reform, working conditions during the pandemic and the situation of workers in the civil service and other sectors represented in EPSU.

The EPSU Secretary General met with the FSS-CCOO, and its new Secretary General Humberto Munoz and a part of the union's executive such as the head of international Yolanda Gil. We met also with Daniel Barragan secretary general of CCOO-Habitat and Sonia Silvia Segovia, head of international, this organisation represents among other workers in the waste or home care.

The next day the meetings took place with the FSC-CCOO, this time without the general secretary Juana Olmo due to a small medical intervention to which we wish a speedy recovery, but with Lucho Palazzo, secretary of communication and Angel Moreno of organisational development and Libertad Camnino Alcocer responsible for international.

The day ended with a meeting in the framework of the federal committee of FICA-UGT in Segovia with Pedro Hojas, secretary general, Juan Antonio Vazquez, head of international and Gustavo Vargas from the water and energy sector as well as other members of the Executive committee. Last but not least, with the federation of Public Services of the UGT (SP-UGT) and its secretary general, Julio Lacuerda, the head of organisation Frederic Monell and Isabel Araque from Trade Union Action.

The EPSU secretariat would like to thank the organisations for their kindness and hospitality.

(6 December) On 30 November EPSU received a group of our members from our Finnish affiliate JHL. The group composed by 25 trade unionists from all sector visited EPSU offices
Solidarity
Union Rights
Jul. 18, 2014
2014 July epsucob@NEWS 13

EPSU works with affiliates to support Spanish nurses in Germany

EPSU has been supporting German affiliates ver.di and Spanish affiliates FES-CCOO and FSP-UGT in a joint effort to defend Spanish nurses working in Germany. It emerged that the nurses were not being paid according to the collective agreement with hourly rates of pay of €9 rather than €13.50 or €14.50. Read more at > EPSU