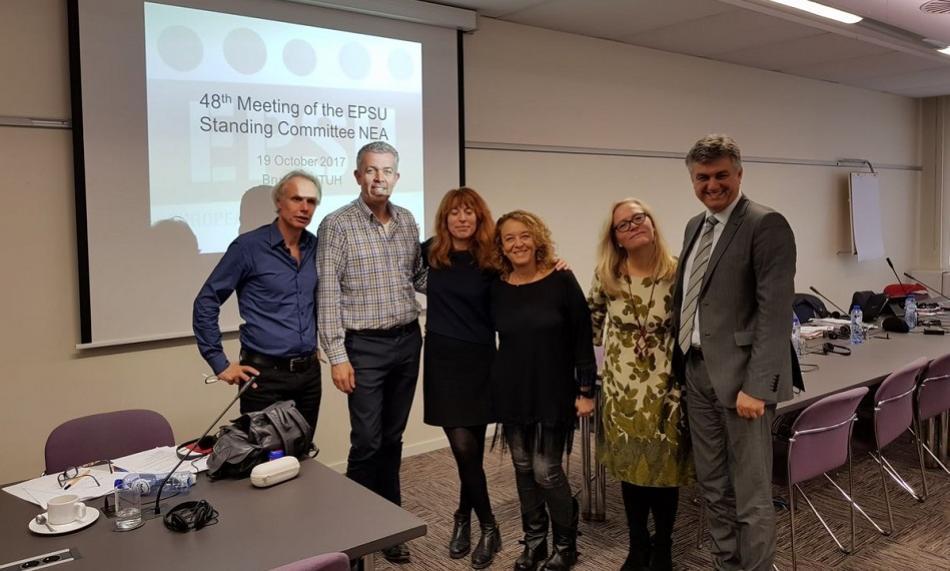 The EPSU standing committee for central governments and EU administration meeting on 19 October discussed, amongst others, the lack of progress with the EC implementation of the social partners’ Agreement on workers rights to information and consultation on matters such as restructuring or health and safety.

Two years after the adoption of the Agreement, following a Commission’s own consultation, EPSU affiliates were disappointed to hear that the Commission was reported to be stalling this social partners’ agreement.

According to TFEU article 155 the Commission is obliged to implement by a decision social partners agreements when social partners request it which is what EPSU and EUPAE did in February 2016. Since then, there has been very little information on the impact assessment due to be carried out to determine whether or not to submit a draft directive to Council. Last summer, rumour has it that the Commission would simply reject the implementation.

The Committee agreed to voice concerns publicly and put pressure on the Commission to come up with a clear explanation on where we are at, the timetable, role of social partners, and should it refuse to proceed with a directive, to explain why. As the Commission might consider to present alternatives to a legislative proposal, it was agreed to not engage in any discussions until the reasons for not implementing article 155 are provided in writing.

This was a matter of credibility for the Commission as it is due to endorse the European Pillar of Social Rights with the heads of state on 17 November at the Gothenburg Summit, as well as a matter of legal certainty regarding the future of European social dialogue. The lack of progress also bore negatively on national developments, as in Italy where trade unions have been fighting hard to reclaim these rights that have been suspended for many years.

From 20 October until the Gothenburg Summit, EPSU will launch a social media campaign to alert on the situation, see #9minthedark. Other channels will be used in cooperation with the ETUC and UNI-Europa who has been waiting now for 5 years for the implementation of its agreement on health and safety in the hairdressers sector. The ETUC Executive Committee on 25-26 October is due to adopt a statement expressing concerns and calling for both a political and legal strategy.

Meanwhile, the EC-backed representativeness study of social partners in central governments will shortly be published by Eurofound. It confirms the representativeness of EPSU across 27 member states as well as of the 17 employers, EUPAE, that cover 88% of the 9.3 million-strong workforce in central governments. Whilst not directly linked to the pending impact assessment of the Agreement, the study strengthens the position of the Agreement signatories.

Similar messages were echoed by both the EPSU-led TUNED and the employers at the social dialogue committee meeting on 20 October. Asked by the employers from Italy (in the chair) and France about the implementation process and the initial legal assessment of the Agreement that has been pending since 15 November 2016, the Commission said that no new elements were available. The agreement was still being evaluated and dealt with by “political authorities”, it was said.

Other matters covered by the NEA committee and SDC CGA meetings were as follows:

The SDC CGA adopted a statement that sums up an18-month-long project on the prevention of psycho-social risks found to be on the increase not the least in public administrations. The statement expresses concerns at the rise of third party violence in central government services such as prison services, employment or social security services and labour inspectors. In total more than 80 managers and trade union representatives covering a large spectrum of central government services took part in the project meetings in Vilnius, Madrid and Berlin held earlier this year and last year.

Apart from staffing and resources matters, the statement makes a number of recommendations including the need for better, regular risk assessments at the workplace that should be drafted in cooperation with the trade unions and include a gender dimension. 0-tolerance for any forms of verbal and physical violence should be clearly posted at the workplaces and a policy with a clear procedure should be in place, monitored and reported on.

National social partners will be expected to report to the SDC CGA on the actual use they will make of the project outcomes available in 8 languages, namely a guide, a video and a background study on the legal framework, role of social dialogue and good practice examples on preventing and tackling PSR carried out by the Labour Research Department. At the initiative of EPSU, the SDC CGA will be invited to endorse the multisectoral policy guidelines on third party violence in the course of 2018.

A new project submitted to the Commission that will deal with digitalisation and improving work/life balance was endorsed by the SDC CGA. The project was initiated by the employers and one of the challenges will be to develop a balanced approach towards digitalisation that benefits both the organisation and the employees and is not driven solely by making savings. Likewise improving work/life balance will need to go beyond teleworking that seems to be top of EUPAE agenda.

The 35 NEA delegates from 20 EU countries, Albania and Ukraine also discussed a new report by PSI and EPSU on the scale of privatisation in migration or asylum related services and detention centres in Europe, the US and Australia. The report was particularly welcomed as it is the first trade union report that sheds light on what has become a booming market for private companies with dramatic consequences for migrants and asylum-seekers. A chapter of the report also deals with the EU outsourcing the management of its borders to third countries such as Turkey. The report is available in EN, and soon in ES and FR.

On tax justice, the NEA committee was brought up-to-speed on the EC draft directive on public country-by-country reporting by large companies as a key transparency tool to identify whether companies pay their fair share of tax or not; it is also potentially a useful tool for collective bargaining. Following the vote in Parliament, the Council of Minsters is expected to reach a common position shortly by qualified majority voting. Many governments including large ones, however, are blocking progress. Affiliates were invited to contact their governments to convince them of the benefits of global public transparency of corporate accounts. An EPSU model letter addressed to governments together with a briefing were made available to NEA affiliates.

Lastly, EPSU affiliates were reminded to bring in more signatures to the European Trade Union petition here www.whistleblowerprotection.eu calling for an EU directive that protects whistleblowers from all kinds of reprisals at the workplace or by the criminal justice system. The target is to reach 100.000 signatures before handing over the petition to the Commission (DG Justice) on 14 November. The EC work plan for 2018 includes the continuation of the work on the issue. EPSU was particularly active in this campaign led by EUrocadres and will present it to the PSI symposium on whistleblowers on 31 October

The EU pillar of social rights says that ALL workers in the EU should have information and consultation rights, but the European Commission denies them to people working in public administrations.
Central government
Information & consultation
Social Dialogue
Jan. 21, 2016