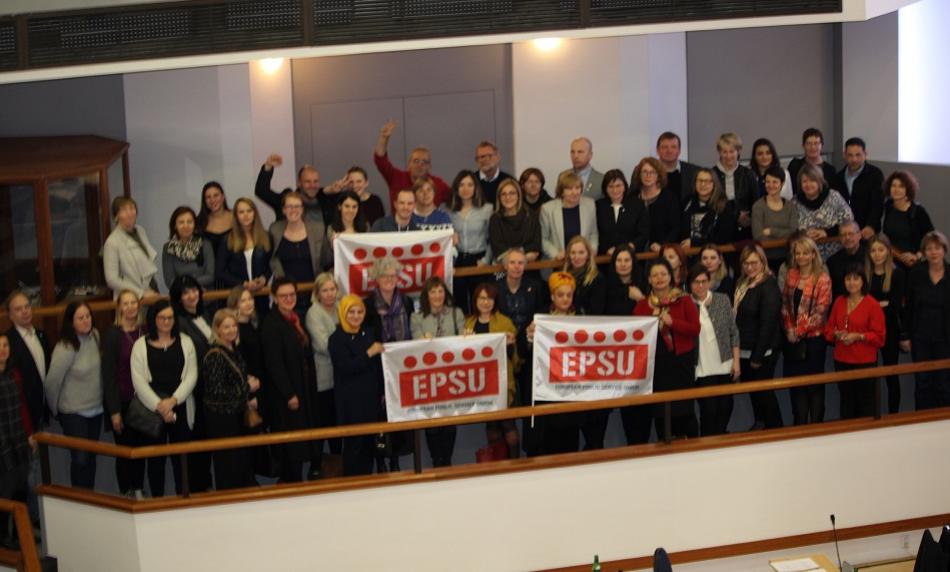 (15 February 2018) On February 7th and 8th, EPSU  affiliates and guests gathered in Prague to discuss and develop the building blocs for a  new gender contract. The conference, which was opened by the President of the EPSU and ETUC Women’s Committee Gloria Mills and the EPSU General Secretary, brought together trade unionists, international organizations, European institutions and researchers in order to define key policies, which could help eliminate gender inequalities and discrimination.  Analyzing the lack of political commitment and will to seriously implement existing gender equality policies, the delegates called for a break with the past (#breakingwiththepast). They noted that over the last two decades, gender equality had dropped off the European agenda. The recent publication of the European Gender Equality index had also confirmed that Europe had made very little progress over the last ten years with a score of only 66,2 out of 100. Women continue to experience gender discrimination as evidenced by the gender pay and pension gaps, under-representation in decision-making and violence at home and in the work place.

The Prague conference tackled five major areas of inequalities, namely  the gender pay and pension gaps, work-life balance, gender and the value of care and care services, violence and reproductive rights and gender mainstreaming.  The lively debates contributed to identifying necessary commitment and solutions. The participation of local employers gave the discussions yet another perspective while the ILO contributed with a broader vision, particularly around the gender pay gap.

At the end of the conference, delegates agreed to support a political statement (The Prague Statement), which together with EPSU’s Roadmap will further strengthen EPSU’s work on gender equality.

A full report of the conference will be made available next month.  The presentations, which were given are accessible using this link.  The Prague Statement will also be made available as soon the Women and Gender Equality Committee (WGEC) has approved the final version.

International Women’s Day is approaching fast. It is a day to celebrate the empowerment of women, denounce sexism and discrimination, and show real  commitment to gender equality. Every year the United Nations proposes  a theme.

The EPSU secretariat is preparing for the IWD by interviewing many affiliates putting together videos  - in particular during the Prague conference - about the challenges of gender equality in a number of countries.  These videos will be made available to EPSU’s members supporting their specific campaigns on IWD.

Moreover, EPSU is in the process of finalizing a study updating its report on the gender pay gap in the public sector. The updated report  will be issued on IWD 2018.

EPSU’s affiliates are urged to signal the kind of actions they plan for IWD to the EPSU secretariat, which will put them on a dedicated webpage. In that way we will learn what everyone else is doing, get inspired or inspire others with a view to  strengthening our messages.

Examples of what others are doing:

The  World Economic Forum's 2017 Global Gender Gap Report serves as a reminder that gender parity is at least 200 years away.  Therefore, the UN issued a call for International Women’s Day 2018 to  #PressforProgress.  The UN also lauds the global activism for women's equality fuelled by movements like #MeToo, #TimesUp.

The  ETUC is calling on its members to  mobilise workers to leave their workplace and stand outside for 5 minutes with hands raised above their heads.

Anybody who is interested in the history of International Women’s Day, will find information following this link: https://www.internationalwomensday.com/About

Responding to a government consultation the IMPACT public services union has called for a number of initiatives on on equal pay and gender equality, including requirements on employers to report on the gender pay gap and recognition of employers who take action to reduce gender equality. The union has submitted detailed proposals for action to address pay for non-teaching staff in education including pay reviews and job evaluation for a range of staff such as special needs assistants and administrative and library staff, the vast majority of whom are women. 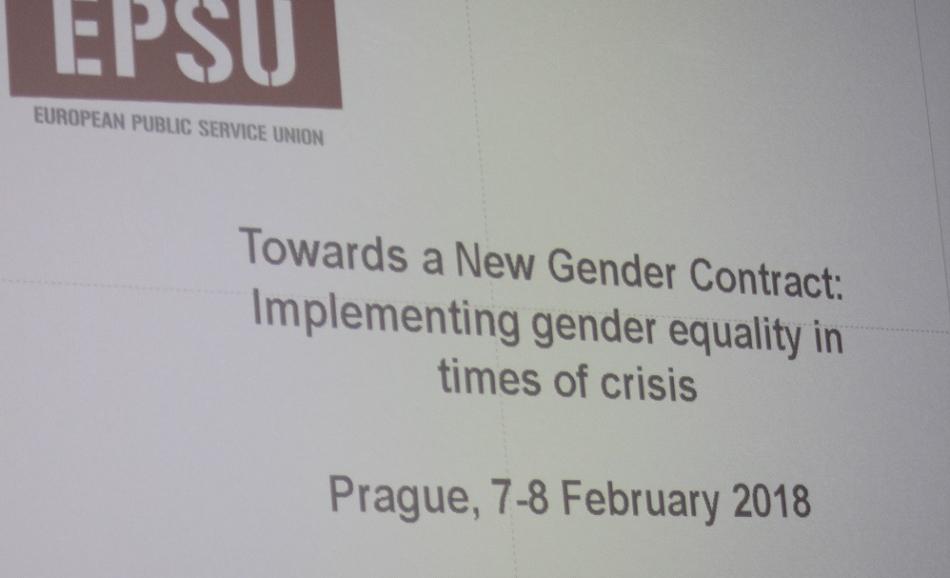 EPSU Women’s Committee will mobilise for a ‘New Gender Contract’

The EPSU Women’s and Gender Equality Committee, meeting in Brussels, on 27 November 2017, adopted a common strategy for tackling the gender pay gap in response to a recent Action Plan on the Gender Pay Gap adopted by the European Commission