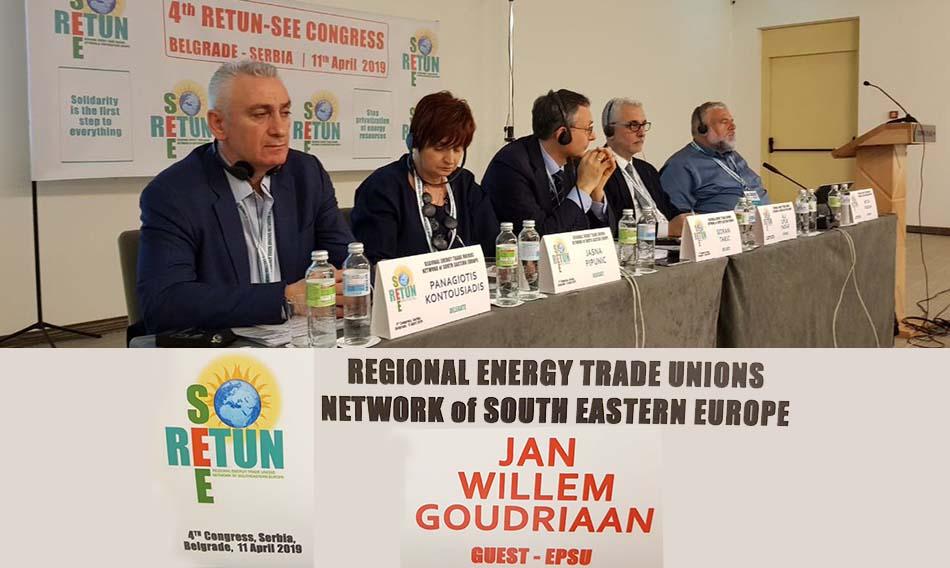 With all the countries of South East Europe being members of the Energy Community, the impact of European Union energy policies is felt beyond the borders of the EU. The countries are facing liberalisation and have to meet targets for CO2 reduction. With many countries relying on coal-fired power and having coal-mining activities, restructuring is facing the workers and their unions. Unions do not always have a voice on the table. The Regional  Energy  Trade Unions Network of South Eastern Europe (RETUN SEE) discussed with the EPSU General Secretary the implications of the zero carbon emission target of the EU in 2050. This target is necessary to keep global warming at 2 degrees. First and foremost, workers and our unions need to be part of the discussions on how to reach the targets in each country, in the EU and in the region. The targets must be reached in a socially acceptable manner for the workers concerned and for the communities affected. This requires funding and the EU should step up its efforts to assist. Employers and unions should consider the implications for the companies and anticipate the changes and bargain about the restructuring. The policies to deal with climate change have to go hand in hand with stronger collective bargaining. EPSU is supporting the unions facing employer and government resistance.

In the debate the EPSU General Secretary referred to the fight against the privatisation of energy networks and energy companies and the successes the EPSU unions have had. The provision of electricity is a public service. EPSU remains critical of liberalisation. It threatens security of supply and has created an investment gap as companies hold back investment decisions in an insecure situation. It has cost jobs. People on low-income have difficulty paying their bills. We have successfully opposed that Member States would be forced to abolish regulated prices for domestic households. Such price regulation is important in the region as liberalisation has led to volatility and price increases. This has a very negative impact on large parts of the population faced with energy poverty. EPSU was part of the energy poverty coalition and governments have now to take measures to protect low-income households.

The EPSU General Secretary was invited by the RETUN SEE network with whom EPSU has cooperated over the years. The delegates elected our colleague Mitja Fabjan from the Slovenian affiliate SDE, the Slovenian Energy workers union, as General Secretary of the network. In his report of activities Mitja Fabjan referred to the social dialogue and the work the employers and unions are doing including on just transition but also on digitalisation and health and safety.

For the work of RETUN SEE

The ETUC organises the Forum to discuss with the trade unions in the region the different European developments. These concerned the future prospects for membership, the social dimension of Enlargement
Energy
Dec. 27, 2004

The European Commission and countries from South East Europe (SEE) are negotiating a Treaty that will extend the EU's competition laws and electricity and gas market opening to SEE. This
Energy
Oct. 01, 2008

(October 1, 2008) The electricity and gas trade unions of South East Europe met to discuss progress with the implementation of the Memorandum of Understanding on the Social aspects of
Energy