(Press Communication, 8 October 2008, Brussels) The Energy Council will determine its common position on the proposed amendments to the internal market for electricity and gas directives, 9-10 October.

"Europe cries out for stable and secure public services citizens and business can rely on. Not for the continuation of dangerous ideological experiments" says EPSU Deputy General Secretary Jan Willem Goudriaan on the occasion of the Council meeting. "Forced ownership unbundling will not bring benefits to citizens. Addressing energy poverty, high and exploitive energy prices, extreme corporate profits and exorbitant corporate executives' pay will. We expect measures of the Council".

- to reject proposals for forced ownership unbundling of the electricity and gas companies. The benefits to destroy well-functioning integrated companies are not proven. It will not lead to more investment nor to lower prices. We support the alternative of stronger regulation. Regulators need to do their job. This has proven to work. It respects democratic control in the Member States. The European Parliament and Member States are deeply divided on the issue of unbundling.
- to support that the implementation of the different models on unbundling do not have negative consequences for workers as also called for by the European Parliament
- to support the proposals of the European Parliament to reinforce protection of low income users by addressing energy poverty through a series of measures including national action plans and to strengthen the rights of household users of electricity and gas vis-a-vis the energy providers, many of whom are very large multinational companies. EPSU, the European Anti-Poverty Network and many other social action groups welcome the proposals of the Parliament. The economic crisis is already leading to more families being in financial problems. Society needs the political signal that it will not leave citizens by themselves and hence we call to reinforce public service obligations.
- to support the European Parliament's opposition against the extensive use of using committees and guidelines as proposed by the European Commission. Further development of the internal market should also be under the control of the European Parliament rather then being dealt with in obscure and non-transparent committees. We ask the Council to support the demands of the European Parliament for more involvement of the social partners and other stakeholders in consultation on new measures and further development of the energy institutions;


We request the Energy Council to instruct the European Commission to focus on how the financial crisis impacts on the energy sector, what it will imply for low-income users and domestic households and how investments will be secured in the energy sector.

The Strategic Energy Review will offer the opportunity to address this. The European Union is to focus on security of supply, on investment in renewable energy sources, fuel savings and more efficient use of our resources, on renewing grids and power plants, pipelines and terminals. And to build and operate this new infrastructure, more workers will need to be trained. Currently there is a skills problem. The continued ideological focus on competition has lead to a dysfunctional market as underlined by the Commission itself. What the continued push for more competition and less regulation leads to, is demonstrated by the financial markets which throw our economies in deep crisis.

The European Union will require close to 2 trillion (!) Euro of investment (as estimated by the European Commission) in essential energy infrastructure over the next two decades to ensure the European economy can grow in a sustainable manner. This can not be left to a volatile private sector, nor can we rely on hedge and private equity funds and uncertain financial products. The EU and Member States will have to react now and secure the funding for our future development.

EPSU has joint social action groups in demanding support from MEPs to tackle energy poverty and take measures to protect low-income households; to read the letter.

Positions of EPSU are available at: http://www.epsu.org/r/198

Research on ownership unbundling and the analysis of Commission proposals is available on: http://www.psiru.org/publicationsindex.asp

"EPSU is the European Federation of Public Service Unions. It is the largest federation of the ETUC and comprises 8 million public service workers from over 200 Public Service Unions in 36 countries. We organise workers in health and social services, local and national administration, energy, water and waste. We are the recognised European social partner organisation in each of these sectors. EPSU is committed to building a European Union that promotes democratically accountable public services of the highest quality, within and beyond it’s borders. For more information on EPSU and our work please go to: www.epsu.org"

(16 June 2008) The European Parliament will consider its position on the 3rd liberalisation package in plenary in June.
Energy
Feb. 29, 2012

(29 February 2012) A broad coalition of trade unions including EPSU affiliates like UNITE, FBU and GMB, environmental organisations such as Friends of the Earth, Greenpeace and WWF, anti-poverty campa
Energy
Jul. 05, 2016 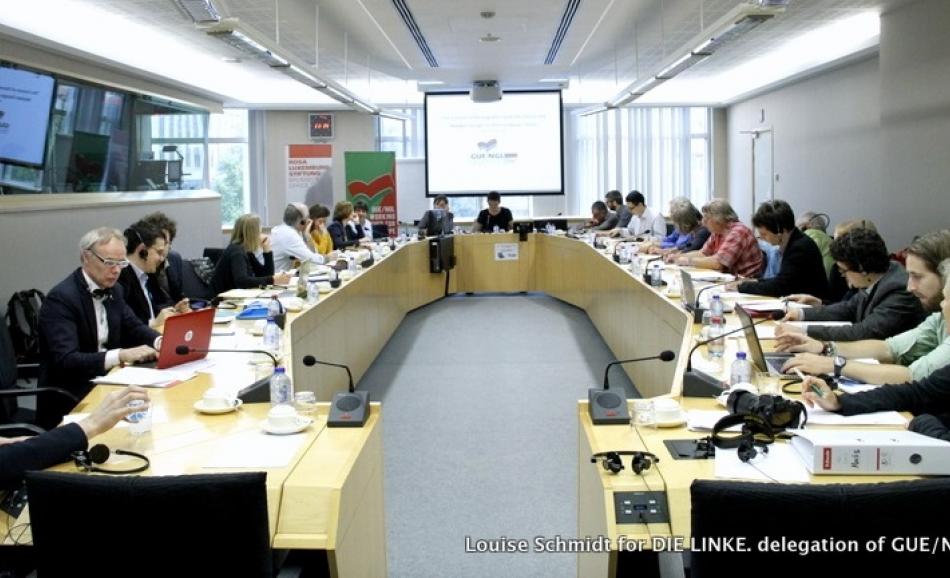 (5 July 2016) The European Commission has made the Energy Union a key priority of its work.  As part of this, the European C
Energy
Environment/Climate Change
All PoliciesAll Policies