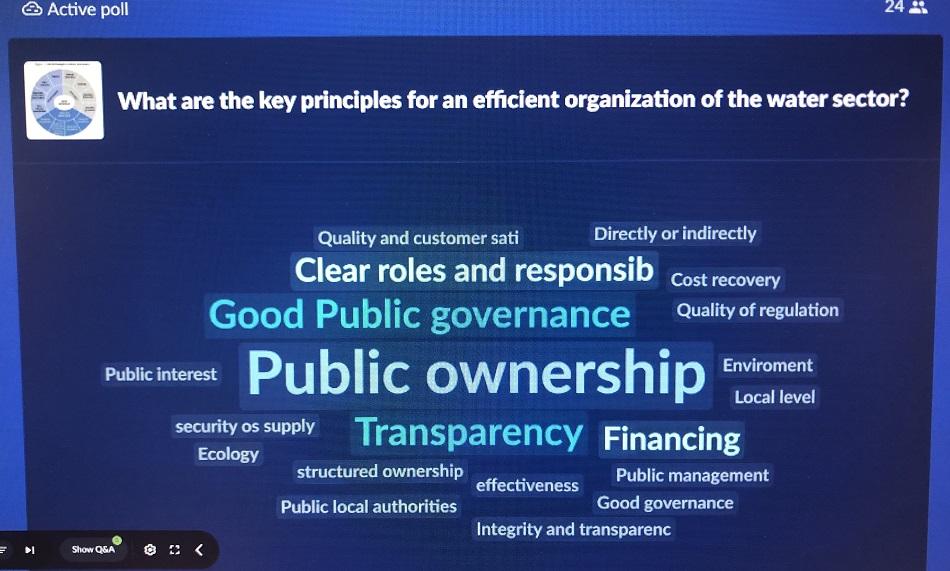 (24 November 2021) On 15 November the European Commission organised a stakeholder event on the functioning of the Concessions Directive adopted in 2014 and the assessment of the water exclusion.  The agenda for the meeting is here Link.

The meeting was divided into two sessions, addressing the overall implementation and functioning of the Concessions Directive, and the economic impact of the  exclusion of the water sector from its scope. Water services were excluded at the demand of then  Commissioner (Michel Barnier) responsible for the internal market.  This was in explicit recognition of the voice of nearly 2 million European citizens who signed the right2water (www.right2water.eu) European Citizens Initiative (ECI).

EPSU welcomed the exclusion of water while aware of the need to protect other public services too and we also sought measures  to strengthen transparency, respect for collective agreements  and the promotion of social, environmental and quality criteria.(*)

The stakeholder event was opened by Ms Maive Rute, Deputy Director-General of the European Commission’s DG Internal Market, Industry, Entrepreneurship and SMEs, who stressed the importance of opening up markets to competition  and the role of public investment in ensuring the twin green and digital transitions.

Paula Ramada from London Economics (LE) consultancy presented some preliminary results  of a report made for the Commission on the impact of the Directive.    She referred to the late transposition (only complete by 2020) and  the  overlap in the legal framework(s) between concessions, Public Private Partnerships (PPPs), and public procurement. She stressed greater legal certainty and transparency as key improvements brought about by the Directive.  When asked about the impact of the Directive on the transparency of the contents of contracts (Article 18 of the Directive), Ms Ramada said that this was not covered by the study, although one case study included in the report looks at supporting measures.   There were also a number of  presentations on national situations.  These included a case study from Amsterdam of a 30 year contract for district heating and cooling (DHC) system.

The afternoon session was dedicated to the economic effects of the water exclusion (Article 12 of the Directive).  A preliminary study on the organisation of water provision based on replies to a questionnaire set to Member States  is in the process of finalisation.  The study shows that three Member States Czech Republic, Poland and Romania apply the Directive to the water sector even though water was excluded.  Presentations included a contribution from RWW Rheinisch-Westfälische Wasserwerksgesellschaft mbH that highlighted the importance of the wide discretion (at the level of national, regional, and local authorities) in providing, commissioning, and organising services of general interest (SGIs), including water.  The importance of public ownership of water services was stressed in the presentation and also by many participants (see poll).

The  European Commission’s  reports presented at the meeting are expected to be published before the end of the year.  See here for the presentations.

(6 August 2012) Against the opposition of several European governments and the European Commission the UN General Assembly declared water and sanitation a basic human right in July 2010. It
Water
Nov. 26, 2012

EPSU position on the EC proposal for a Directive on the award of concessions contracts - adopted by the Executive Committee November 2012
Feb. 19, 2013

(19 February 2013) The government of North-Rhine Westphalia asks the German MEPs from the region to take account of its opposition to the directive. It wants water services to be
Water