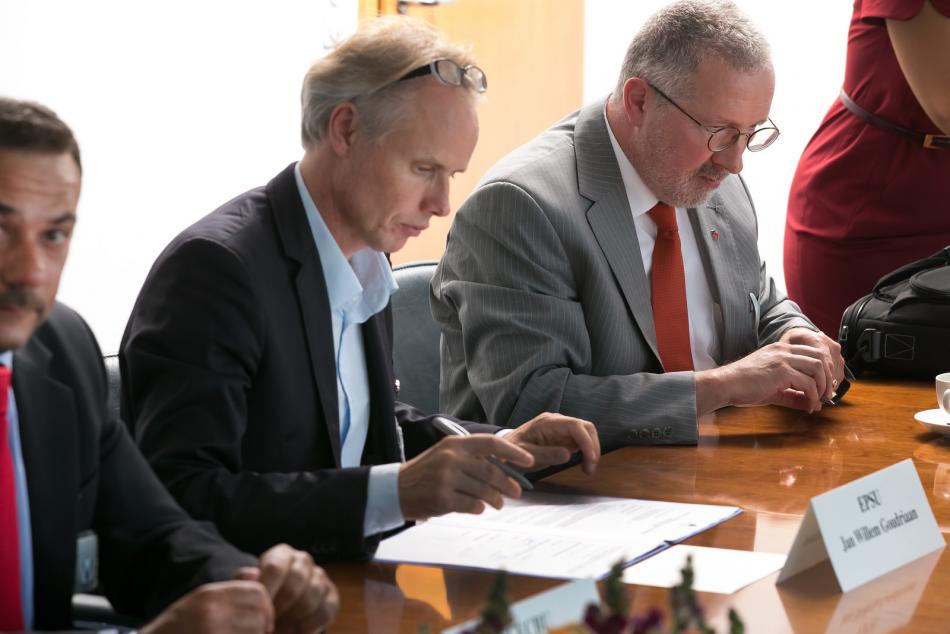 (19 September 2014) EPSU signed an agreement to extend information and consultation rights to workers employed in the Single Supervisory Mechanism (SSM) with European Central Bank (ECB) President Mario Draghi, 17 September 2014. The SSM will execute the specific tasks of the ECB concerning policies relating to the supervision of credit institutions. The SSM brings together workers of the ECB and the national authorities of Member States who will work in integrated structures, in particular the so-called Joint Supervisory Teams (JSTs), comprising staff of both the ECB and the national authorities. When fully operational these teams will include ca. 1000 workers.

EPSU's General Secretary Jan Willem Goudriaan commented: "The ECB recognizes the crucial importance of information and consultation rights for workers at a moment of restructuring and new methods of work. The social dialogue with the trade union representatives will now extend to the new tasks of the Supervisory Mechanism that impact on the function, role and activities as well as on the employment situation of employees of the relevant national authorities and the ECB."

The supervisory mechanism was created to oversee the banks that failed workers, their families and communities in Europe by speculating, risk taking and the greed culture of bonuses throwing the European and global economy in a deep economic and financial crisis. It also led to the use of trillions of dollars to safe the banks, paid for by taxpayers and not used for improving health care, education or to invest in infrastructure. The root cause for this was the lax regulation of the banks and the privatization of many public banks as part of the neo-liberal ideology and dominance by corporate interests of the political agenda.

EPSU questions the planed headcount for the SSM against the background that the ECB already is understaffed. Additionally IPSO, the union organizing ECB’s staff, declares it totally unacceptable, that the new SSM staff gets in principle only term contracts. “That will lead to an unbelievable situation for such a high level public institution: two thirds of its employees have no permanent contract. Too much for an institution declaring itself as independent,“ says Wolfgang Hermann, General Secretary of IPSO.

EPSU signed the statement together with representatives of its sister European Federation UNI-Europa as well as representatives of the Standing Committee of European Central Banks unions. EPSU is represented in the ECB via IPSO which represents ECB staff and cooperates as affiliate with Union Syndicale Fédérale to represent workers in this European public institution. The signing took place in the ECB, Frankfurt, 17 September.

Addendum to the "Social Dialogue with regard to the European system of central banks" - signed on 17 September 2014:


up
488 users have voted.
Sectors:
National and European Administration

Further to the report in epsucob@NEWS 10, more than 100 employees of the Future Directions social care company are taking five days' strike action in defence of their pay and conditions. Public service union UNISON says that the company, actually owned by Calderstones NHS Trust, part of the national health service, won the contract in Rochdale in North West England knowing that it would have to make cuts. A demonstration took place in the town on 29 August and UNISON is calling on its local branches to support the strikers.Read more at > UNISON
Jan. 03, 2019
2019 January epsucob@NEWS 01

Public services union ver.di reports that there is increasing discontent among church employees over the failure of the Evangelical Church to negotiate collective agreements to cover its 150,000 workers who work mainly in health and social services. Recent years have seen no pay increases and employees argue that there is not a fair distribution of representation on the committee that deals with employment issues. Ver.di is calling for a collective agreement to cover the church employees that would help re-connect them to the pay and conditions that apply in the health and social services sector and wider public sector agreements.Read more at > ver.di (DE)
All PoliciesAll Policies