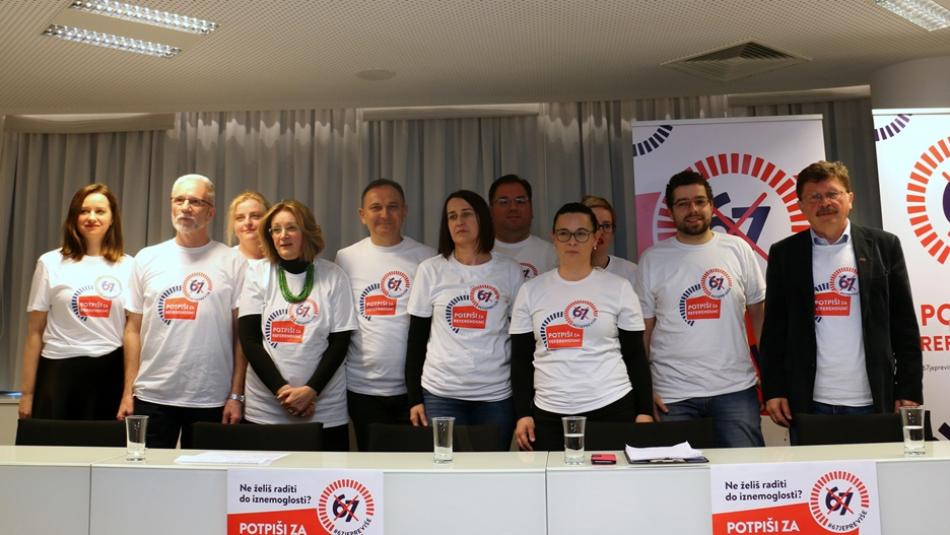 (14 May 2019) The three main Croatian trade union confederations are celebrating their success in getting 600,000 citizens to sign a petition calling for a referendum on pensions and retirement.

The confederations - SSSH, NHS and MHS - have been campaigning for some time to reverse legislation that introduced a new retirement age of 67. Having been ignored by the government the unions used their legal right to organise a petition to call for a referendum on the issue. The target of 373,568 signatures (10% of registered voters) was easily surpassed in a two-week campaign beginning on 27 April.

The government will be required to organise a referendum once the signatures have been checked and the Constitutional Court ruled on the legitimacy of the key union demands which include a return to a retirement age of 65.

In November last year, EPSU sent a message of protest to the Croatian prime minister and labour minister about legislation that was then going through parliament to speed up the move to the retirement age of 67. EPSU also sent a message to the unions to support their referendum campaign.

Three trade union confederations have come together to launch a campaign to secure a referendum with the aim of reversing changes to the retirement age. The unions want to retain 65 as the normal retirement age but the government has already put in place legislation to increase it to 67 and more recently to bring forward the date of full implementation. If the unions can get the support of 10% of the electorate then the government will have to organise a referendum. EPSU sent a message of support to the unions.

EPSU has sent a message of support to the campaign by Croatian unions to reverse recent changes to retirement and pension rules.
Pensions/retirement