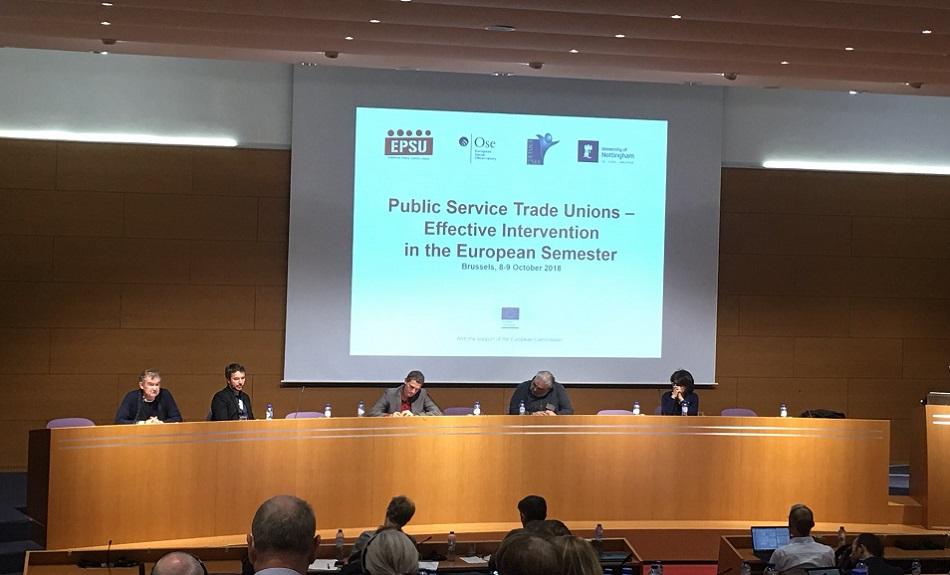 (12 October 2018) Over 60 participants, mainly affiliates from EPSU and the ETUCE education federation, met in Brussels on 8-9 October to debate the impact of the European Semester – the EU’s process of economic governance – on public services. The two key themes across the one-and-a-half day meeting focused on whether there had been any real progress on social policy and any improvement in the role of trade unions in the process.

Along with introductory sessions on the Semester and public services and the involvement of trade unions, there were five country panels with detailed discussions on the situation in France, Ireland, Italy, Denmark and Latvia. The two final sessions looked at the role of the European social partners in the public services and the impact of the European Pillar of Social Rights on the Semester.

The key themes that arose during the debates included:

The conference is part of a two-year project funded by the European Commission, involving EPSU, the ETUCE and two research organisations – the Brussels-based European Social Observatory (OSE) and the University of Nottingham (UoN).

On the first day, following a welcome from Susan Flocken, General Secretary of the ETUCE education federation and project coordinator, Richard Pond from EPSU, there were contributions from Jeroen Jutte, head of unit at DG Employment in the European Commission, Howard Stevenson (UoN), Guillaume Afellat, responsible for social affairs at the CEEP public service employers’ organisation, Bart Vanhercke (OSE) and Marco Cilento who coordinates the European Trade Union Confederation’s work on the Semester.

The five country panels on the second day included contributions from European Semester Officers from France, Ireland, Denmark and Latvia, EPSU affiliates from each country, representatives of trade union confederations (France, Italy and Latvia) and employer organisations (Latvia and Italy). The European social dialogue debate featured Paola Cammilli from the ETUCE, Daniel Wisniewski of the EFEE education employers and Mathias Maucher, policy staff at EPSU for health and social services. Sebastiano Sabato rounded off the conference with a presentation on the European Pillar of Social Rights.

A more detailed report is published below.

An overview of the National Reform Programmes of 2011, A report by the ETUI for EPSU - Christophe Degryse, December 2011 Introduction This report is based on a full examination
Economic Policy
Apr. 11, 2019 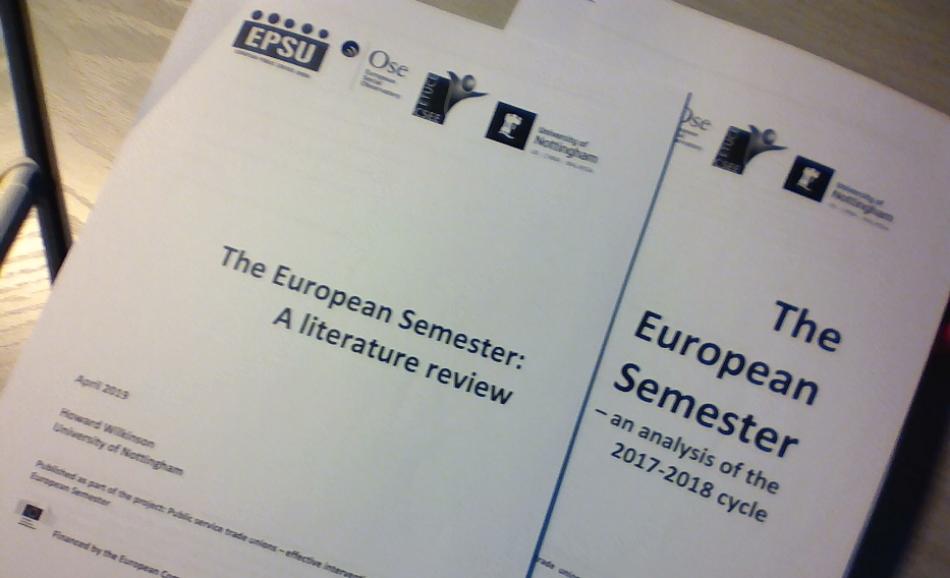 Two reports published today provide an insight into how the European Semester deals with public service issues and the extent to which trade unions have a role in the process.
Economic Policy
Dec. 19, 2008
022 [email protected] December 2008

The impact of the economic crisis on pay bargaining was one of the key debates at this year’s conference on collective bargaining and social dialogue in the public services. Participants also discussed how to tackle the gender pay gap with news of two important initiatives in Norway and Denmark. A number of workshops enabled delegates to exchange information on issues such as violence at work, transnational collective agreements, demographic change and migrant workers. Read more at > EPSU (EN)