Representatives of 27 affiliates from 17 countries attended the meeting along with colleagues from the ETUC, European Trade Union Federations (EPSU and EFBWW) and the ETUI.

The meeting agreed a statement on the European Commission's country-specific recommendations relating to wages and/or wage-setting systems. It called on the Council not to adopt them and on the Commission to undertake a serious analysis of the consequences of its “internal wage devaluation” policy.

The second part of the statement agreed by the meeting focuses on the ETUC’s initiative to establish a new coordination of collective bargaining.

Responding to the European Semester

ETUC Confederal Secretary Luca Visentini explained that the development of a new “toolkit” and how the ETUC and affiliates respond to the European semester were the central aims of the meeting but that an initial discussion on the 2013 country-specific recommendations would set the scene.

ETUC advisor Ronald Janssen outlined this year’s country-specific recommendations (CSRs) in as far as they related to wages and/or wage-setting systems. There was then an exchange about the situation at national level and the extent to which trade unions had been involved in the European semester and prospects for getting changes to CSRs.

The situation in Sweden provided the main contrast with the trade unions managing to establish a good relationship with Commission representatives and this year’s document on Sweden were seen as much better than in 2012 when the social partners successfully intervened with the support of the government to get a CSR on lower pay rates for younger workers withdrawn completely.

Unions in Belgian were also working on improving their relationship with Commission representatives and to be in a better position to challenge the prevailing views in the Commission.

There were a range of reactions with some affiliates saying they had no role in or influence on the process while others said that they were consulted but in a limited way with no real opportunity to secure changes in the national reform programmes or CSRs.

It was suggested by the EFBWW that each country prepare a one-page note on its CSRs for use in lobbying national parliaments and that the ETUC coordinate this, using also the media, to try to influence the process in the European Council.

It was also argued (CSC, Belgium) that the ETUC should put forward an alternative economic analysis, citing in particular the work by the ILO on wage trends and the falling share of wages in the economy.

For the ETUC Luca Visentini said it would be useful for the ETUC to draft a response to the CSRs on wages that could be agreed by the committee and this would be produced for discussion on the second morning.

Odile Chagny of the Groupe Alpha consultancy presented some ideas around the relationship between wages, inflation and productivity and the role that wages can play in supporting demand and preventing deflation. She also introduced a number of concepts to categorise how collective bargaining developments in different countries could be evaluated taking account of the particular characteristics of that country. These concepts were intended to be part of the toolkit’s assessment of the outcomes of collective bargaining.

ETUC advisor Marco Cilento introduced the draft outlines of three parts of the toolkit. The first was a chart setting out how the ETUC and its affiliates could intervene at the various stages of the European Semester.

The second part was an updatable table noting the extent to which national trade union organisations were involved in the semester, for example, in relation to drafting national reform programmes and responding to the CSRs.

The third part was another updatable table recording the state of play in relation to collective bargaining and employment law with the possibility of classifying countries as red or green to indicate the extent to which their systems were under attack.

There were a number of positive reactions to the proposals although some caution expressed about the amount of work involved in implementing different parts of the toolkit and providing information. It was also suggested that the ETUC work with the ETUI to ensure there was no doubling up of work in some of these areas such as the mapping of labour reforms.

The section on the “ETUC Semester” should take account also of the various committees, EMCO, etc which were part of the process and where lobbying might need to be coordinated.

Marco responded to some of the comments saying that the various parts of the toolkit need not require so much work and certain elements, such as the background country information on wage setting, could be an entirely voluntary process of providing information. He said that the main aim of the toolkit was to help the ETUC amplify at European level the main challenges and demands from the national level.

Luca also explained that a collective bargaining website would be developed that would be an interactive tool that would improve the processing and distribution of information.

Toolkit sections on inflation and productivity

Marco introduced the idea that there needed to a European level assessment of collective bargaining outcomes and that in order to do this there had to be some work done on agreeing definitions and sources on inflation and productivity at European and national levels. There was some debate on this and further clarification provided underlining the need for objective data to be able to monitor trends and assess to what extent implementation of the wage guideline is happening.

One suggestion was that data on the wage share in the total economy might be used as a straightforward indicator of trends at national level. There was some concern about the extent to which national data was comparable and how it might be assessed at European level, or whether even concepts like productivity were used at all in negotiations in some countries.

The final session discussed how to improve the flow of information with proposals for a collective bargaining website and a contribution from colleagues from the ETUI and the AIAS research organisation at the University of Amsterdam who had improved the coverage of the ETUC/ETUI collective bargaining newsletter as well as developing a searchable archive.
up
553 users have voted.
Policies:
Collective Bargaining

The ETUC organised a summer school for its collective bargaining committee in Florence on 10-11 June where participants agreed a statement urging the European Council not to adopt any of the European Commission's country-specific recommendations on wages. The meeting agreed that the Commission's approach continues to be to repress wage developments despite the risk of deflation and continuing recession and with no regard for the impact on living standards and equality. The meeting also discussed proposals for how the ETUC could coordinate around the European Semester.Read more at > EPSU
Apr. 03, 2008 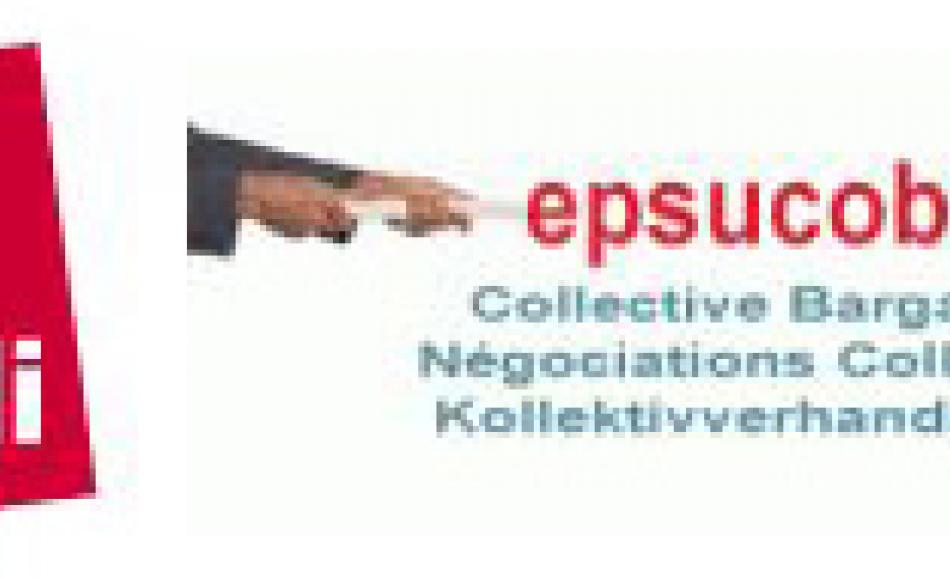 (03 april 2008) After last week's disappointing recommendations from the arbitration commission, verdi is now recommending to its members that they accept a new offer from the federal and local govern
Collective Bargaining
Feb. 24, 2011

(Brussels 24 February) The first meeting of the European Federation of Public Services Unions (EPSU) Economic Policy Group has a clear message for the president of the European Central Bank (ECB), Cla
Collective Bargaining
All PoliciesAll Policies