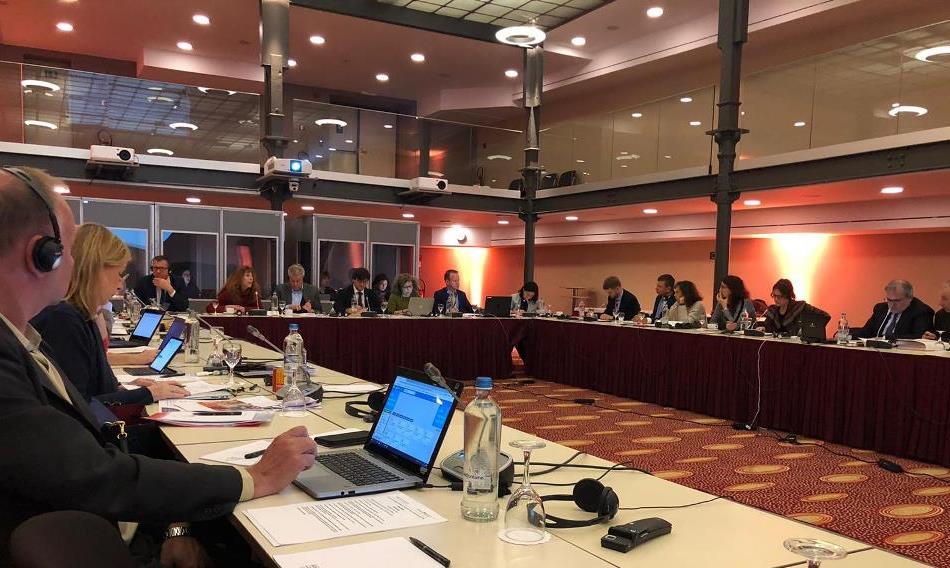 (28 November 2019) On 19th November, the  Social Dialogue Committee for central and federal government administration  -SDC CGA- met in Brussels to discuss the implications of the recent EPSU Vs European Commission court ruling,  and to formally adopt a new joint checklist of dos and don’ts on digitalisation and work-life balance,  amongst other things.

One of the most pressing items on the Committee agenda was the recent EPSU Vs EU Commission court ruling. On 24 October, the EU General Court ruled against the EPSU in a case concerning the SDC CGA  social partner agreement which provides for the rights of central government workers to be informed and consulted on matters such as restructuring. This agreement was adopted  in December 2015.

The judges granted the Commission almost complete discretion for the handling of social partner agreements. Both the unions, TUNED, and the employers, EUPAE agreed that this leaves much uncertainty as to the future capacity of social partners to negotiate  agreements with legal binding effects.  It also hinders the prospects of achieving EU minimum standards on information and consultation rights for all EU government administrations (more information here).

The Committee agreed to draft a joint letter asking Commissioner-designate for Jobs and Social Policy, Mr Schmit how the Commission will ensure full transparency and predictability regarding the modalities of social partner agreements, pursuant to article 155.2 of the Treaty on the Functioning of the EU. If agreement on the contents of the letter can be reached, it will be sent early December. It will also be sent to all sectoral social dialogue committees.

Another key item on the Committee agenda was the adoption of the checklist of dos and don’ts on digitalisation and work/life balance, the  outcome of a two-year EC funded project.

The objective of the checklist is to improve work/life balance by minimising the risks and maximising the opportunities associated with digitalisation.

The checklist is based on discussions between employers and trade union delegates which took place at three meetings in Rome, Madrid and Paris this year. It is also informed by a study on the work/life balance and digitalisation legal frameworks in Europe, including the recently adopted work/life balance directive,  and collective agreements on issues such as right to disconnect, and training and telework arrangements.

Importantly for trade unions, the checklist recognises that the ‘Brave new world’ of digital work can underestimate the health and safety risks associated with digital workplaces, such as isolation, unpaid overtime, and stress. It also recommends framing digitalisation and work/life balance in a strong collective bargaining culture based on trust, which promotes rather than harms the hard won achievements on gender equality.

The checklist  is addressed to trade unions and managers in central government administrations, and will hopefully contribute to EPSU’s overall work on digitalisation. It provides a good basis for discussing further the relevance of negotiating a new agreement in the future.

The guidelines for a checklist of dos and don’ts  are available in EN, IT and FR.

The Committee also discussed the European Commission plans regarding the transposition of the Transparency and predictability of working conditions directive which was adopted earlier this year.

The Commission informed the Committee that an expert group will assist in monitoring the transposition of the directive into domestic legislation. The group will be comprised of member state representatives and 16 social partners at cross-sectoral and sectoral level as observers.

The list of observers was not available at the time of the meeting, but the Commission announced that selection has been left to Business Europe and ETUC to coordinate for the employers and trade union side respectively. It announced that the expert group would first meet on 25 November without the observers.

Notably, the directive allows governments to exclude civil servants, armed and police forces as well as public emergency services from the provisions regarding predictability of working conditions in chapter III which cover training, probation periods, predictability of work schedules and a provision on collective agreements.

In view of the implications of the directive for the public sector, the SDC CGA reiterated its interest in being part of the expert group and informed the EC that Business Europe had not yet contacted EUPAE. The Commission did not comment, but confirmed it would inform the Committee on future developments.

Discussions on migration and asylum services remain difficult for the Committee, as the employers find the issue is not their remit. While they agreed to collect good practices on how to improve working conditions in migration and asylum, not the least by increasing recruitment, there is not yet enough information on this.  TUNED from Spain, Italy, Portugal, France, Czech Republic and Romania are expected to provide further comments on the short summaries made by their respective employers.

Reports from the EU agency of fundamental human rights and Eurofound continue to be highly critical of the poor quality of administration for migrants and refugees, particularly regarding delays in the processing of asylum claims, which has a knock on effect for inclusion into society. TUNED concluded that these damning reports make it all the more urgent for employers and unions alike to jointly address those serious shortcoming. For this we need more details about the situation on the ground and how working conditions can be improved to also to give people, especially those fleeing from war and persecution, a real chance in life.

Other items on the agenda

The Committee noted the establishment of a taskforce with a view to assess the effectiveness of the multisectoral guidelines on prevention of third-party violence and harassment,  adopted by the SDC CGA last December. The task force’s first meeting will take place at the end of the month, and so far, will consist of the social partners from hospitals, local and regional governments, central governments, private security, education and transports. The proposal is to submit a social dialogue project to the EC next year. The  ILO convention 190 on prevention of violence against women and other developments at national level will feed into the project.

On a positive note, the Committee was informed that a Nordic government might soon join EUPAE. If confirmed, it will bring the total number of governments to 19, following the adhesion of Slovenia earlier this year.

The European Commission has produced a short overview of paternity and parental leave provisions across EU countries revealing that, for example, paternity leave is available in nearly all member states but the length and level of compensation vary considerably. The draft directive on work-life balance proposes two weeks' paternity leave paid at the level of sick pay. While 17 member states already have the two-week minimum only 13 offer it on the basis of at least 66% of previous earnings.

The European Trade Union Confederation has welcomed the progress made in the EPSCO formation of the Council last week regarding the proposal for a Directive on Work-Life Balance, namely the adoption of a general approach.
Work-life balance
Nov. 07, 2019
2019 November EPSU Collective Bargaining News 21