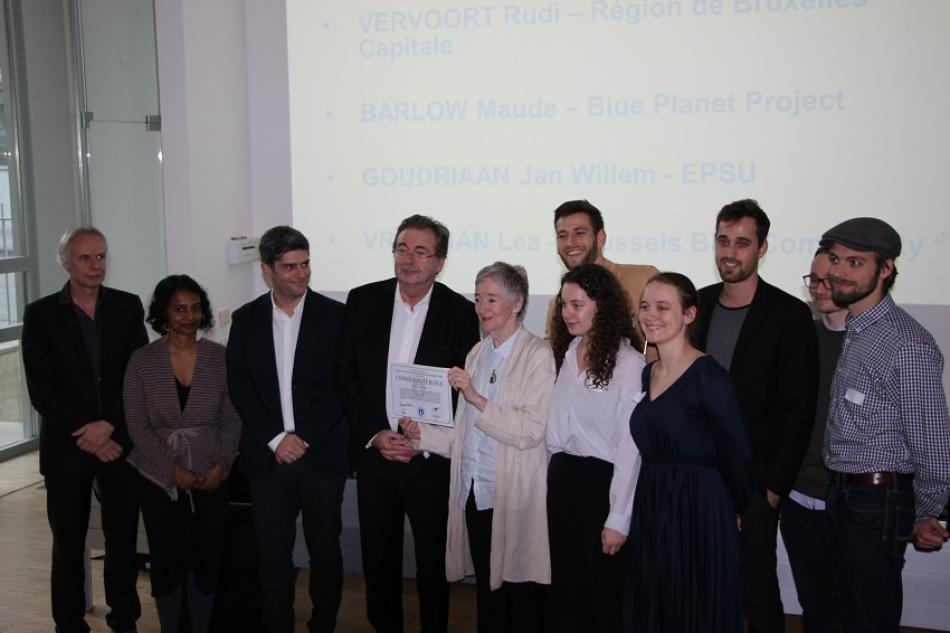 (4 December 2019) On 29 November 2019, the Brussels Region officially became a Blue Community. EPSU is a proud partner of the Brussels Blue Community project, and is pleased to have been part of this event which celebrates being one step closer to ensuring the right to water across Europe.

At the very first European meeting of the Blue Communities in Brussels, participants discussed the fundamental role of water in our daily lives, and ways in which to improve its management. EPSU General Secretary, Jan Willem Goudriaan was invited to speak at the press conference about the work EPSU has done on the European Citizens Initiative right to water campaign. The official Blue Community certificate was presented by Honorary chairperson of the Council of Canadians, Maude Barlow, and Minister-President of the Brussels-Capital Region, Rudi Vervoort.

The Blue Planet project was established in 2009 by the Council of Canadians to encourage cities, organisations and communities around the world to better appreciate the fundamental role of water in society and in all life. In practical terms, the organisation is committed to guaranteeing the human right of access to water, promoting the use of tap water in local communities, prohibiting bottled water, and to ensuring that water production, distribution, drainage and treatment are managed by public institutions.

The Brussels Blue Community project was initiated and led by Masters students from the Institute of Higher Studies of Social Communications (IHECS), their maxim: “act local and aim global”. In effecting change at the local level,  the Brussels Blue Community will contribute to a long-term global change. The Brussels-Capital Regional Government confirmed its intention to join the international community of the Blue Communities in its 2019 Regional Policy Statement. The project culminated with a screening of a documentary created by the students on 29th November.

Since its creation, more than 40 communities have joined the Blue Communities. In Europe it’s members include the cities of Berlin, Paris, Zurich, Cadiz, Thessaloniki, the Universities of Sankt Gallen and Lavras. EPSU is proud to have supported the project since 2013, when Bern became the first European Blue Community.

(18 September 2013-Press communication) Social justice, environmental, and labour organizations in Europe are applauding the city of Bern for taking a bold new step to protect water as a commons
Water
Oct. 05, 2009

Across the world organizations are participating in the Blue October week. The water activists stress that water should remain in public hands. The October week is chosen as 31 October
Water
Mar. 22, 2016

Dear colleagues, We regret to inform you that due to events in Brussels this morning our World Water Day action has had to be cancelled in Brussels. Our thoughts are
Water