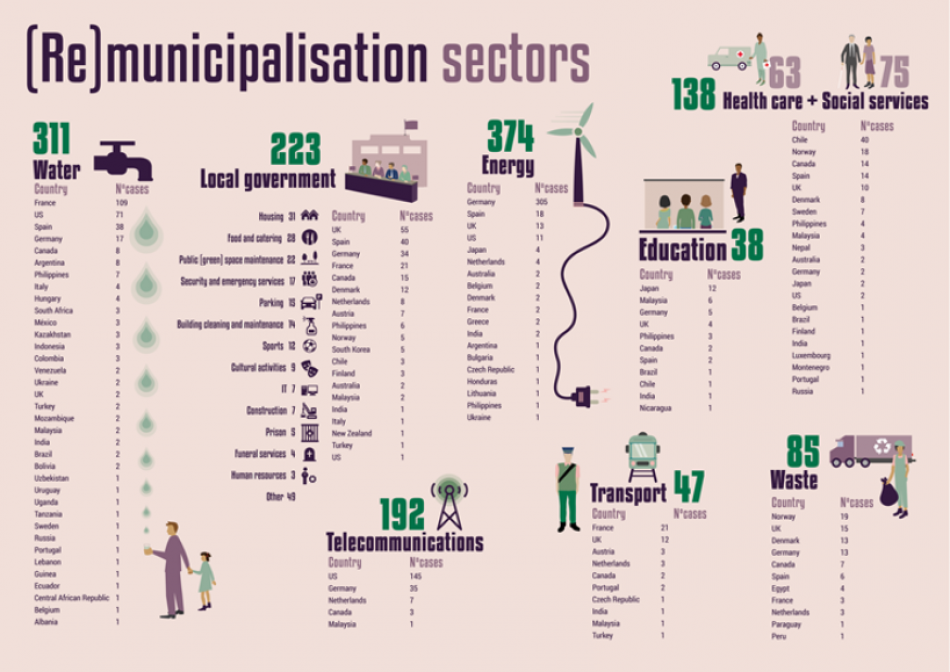 (18 June 2020) Over 30 representatives from 14 countries met online last week (18 June) to debate how to bring public services back in-house. The meeting was part of a project involving EPSU and being coordinated by the trade union-backed Syndex consultancy.

Richard Pond of EPSU opened the discussion with an overview of trends in remunicipalisation and insourcing. A global network of organisations led by the Transnational Institute and including EPSU, PSI and individual affiliates have been working together to monitor insourcing developments. Their most recent research was published in May and found 1400 examples of remunicipalisation in 1400 cities in 58 countries.

The survey also found that in 158 cases workers benefitted improved pay and conditions once they were directly employed by the public authority or publicly owned company. However, in most cases information on the impact on employment conditions was not known and requires further research. While the assumption is that workers do mainly benefit from remunicipalisation, the process is not always straightforward.

Fabrice Warneck of Syndex looked at the legal angle with a presentation on Directive 2001/23/EC that covers workers’ rights in the transfer of undertakings. He explained the key elements of the legislation and its relevance to public authorities and then outlined some of the case law to indicate how the directive had been applied in practice.

The impact on employment rights is also explored in some detail in a new guide from PSI, due for publication shortly. The guide was researched and written by Vera Weghmann of the Public Service International Research Unit whose presentation focused on the remunicipalisation process. She discussed how trade unions can be involved through campaigning and lobbying, promoting the public sector option and dealing with any resistance from private companies.

Vera referred to some of the 50 case studies included in the new guide which also contains a detailed remunicipalisation checklist for trade unions.

Representatives of several EPSU affiliates took part in the discussion, noting the experience in particular from Norway where the Fagforbundet trade union had developed a successful national strategy on remunicipalising waste and in London where trade unions had worked closely with the Islington local authority in bringing a wide range of services back in-house.

The debate covered a number of other issues including the importance of joining forces when possible with civil society organisations campaigning for remunicipalisation and of unions pooling resources to make them more effective in challenging the arguments of the private contractors.

Syndex is working with other European trade union federations in this European Commission-funded project: “Workers’ influence on outsourcing, tender processes and transfer of employment contracts: watch the gap!”. The debates in the various workshops will be brought together in a final conference that is due to take place on 1-2 December in Berlin. EPSU will contact affiliates with details of the conference later in the year.

A new report commissioned by UNISON provides survey evidence on how local authorities in the UK are insourcing services - bringing services back in-house.
Remunicipalisation
Aug. 07, 2013

(August 2013) A survey by the Soste social sector organisation aimed at senior employees in the mainly municipal social and health care sector, found more than a third saying that
Remunicipalisation
Jun. 28, 2011

A new report from UNISON, Insourcing update: The value of returning local authority services in-house in an era of budget constraints, reveals how many local councils in the UK are
Remunicipalisation