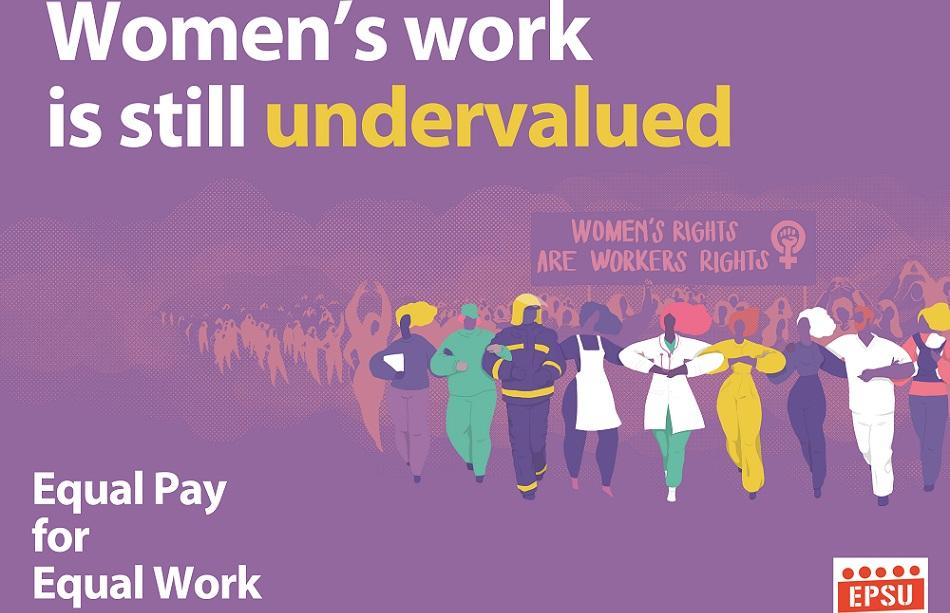 EPSU Statement, 8 March 2019 : On International Women’s Day, EPSU stands firmly on women’s side and urges you to move forward and break with the past. We want equal rights, equal pay and equal representation.

Once again, in 2018, employment trends showed that less women are in employment than men, despite achieving higher educational results and obtaining higher qualifications.  When they work, women tend to be paid less. The average gender pay gap in the EU is currently around 16% and women often work in sectors with lower wages. They carry the majority of the care burden, being more involved than men in looking after children and older family members. Finally, when they retire, they have a higher risk of poverty, with a  gender pension gap still around around 36%.

This is unsustainable. Today, on the anniversary of International Women’s Day, EPSU’s affiliates are taking the streets, taking over the public space and discourse, to give impulse to that change which needs to happen as soon as possible.

This does not end today: on 8 March we celebrate the anniversary, the fight for equality goes on every day, 365 days a year.

In the coming weeks, in particular, there are at least three occasions to contribute to the fight for women’s rights and gender equality. EPSU calls all affiliates and citizens to show their support with three concrete actions:

1. Share our briefing “Strengthening public services – a double win for gender equality” and demands for the UN Commission on Status of Women, that will take place next week in New York. Our messages are clear:

Women make up the majority of workforce in many public service sectors and their work must be valued, ensuring  decent working conditions. Doing so also has a positive impact on the quality of services provided, and thus on the lives of the public service users – women being at the forefront of them, as well.

It is indispensable that the strengthening of public services happens in line with the values public services represent: solidarity, equal access, democratic control. Only public investment financed through progressive taxation, and not market-based alternatives (like public-private partnerships) can help realise redistribution that benefit women, create public goods, and provide decent wages and working conditions for women working in the sector.

2. Respond to the public consultation on Gender Pay Gap and Equal pay for Equal Work (https://ec.europa.eu/info/law/better-regulation/initiatives/ares-2018-3415794/public-consultation_en) demanding for EU legislation on Gender Related Pay Discrimination. Insert your personal data and choose the option: “There is need for new legislative measure at EU level” in question 16. Any citizen can respond to the consultation, make your voice heard, say loud and clear that women deserve to be paid equally. For years there have been non-binding initiatives but the results are that equality has not been reached. Some Member States are introducing equal pay laws at national level, an EU law would cover all workers in Europe.

3. Go out and vote on 26-27 May for the European Parliament elections. Go out, vote and vote for candidates that stand for gender equality. Women’s presence in elected positions is still low, politics is still very much a men’s issue. Go out and vote for diversity. Nobody would feel stronger for equality than those who have been discriminated themselves: vote for women. EPSU supports the ETUC campaign for the European Parliament Elections asking for more gender equality.

EPSU Statement - Breaking with the past

EPSU Prague Statement – Breaking with the past

EPSU research She works hard for the money