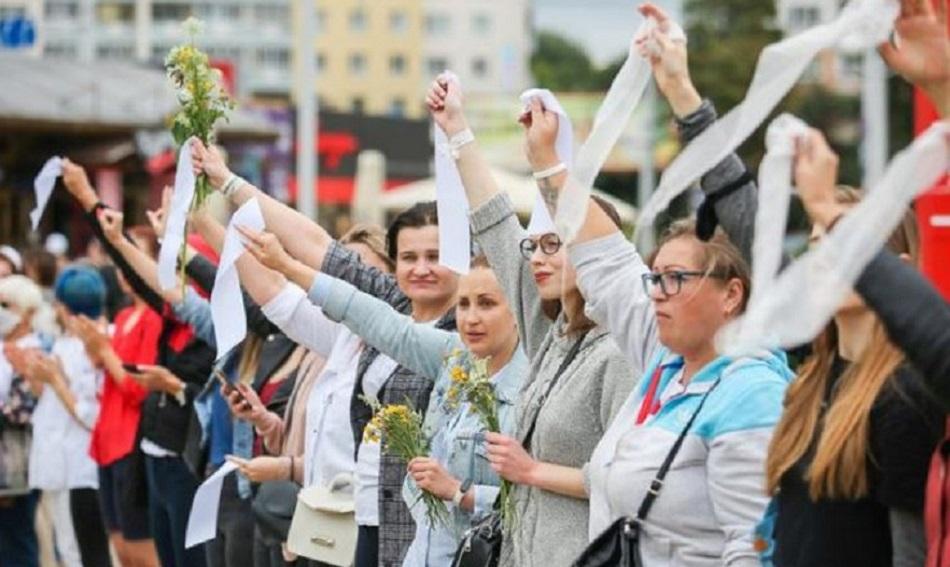 (12 August 2020)  Security forces have detained and used violence against peaceful demonstrators in Belarus who are protesting the outcome of the country’s fraudulent presidential election. EPSU strongly condemns the falsified elections, demands an end to the police violence and calls for the immediate release of journalists and trade unionists involved in the protests and strikes.

It was declared on Monday that dictator Alexander Lukashenko, who has held power in Belarus since 1994, had won 80 per cent of the presidential election vote. The European Commission and other European organisations have called the elections neither free nor fair, and the result sparked protests in Minsk and other cities.

According to independent trade unions in Belarus, members of the ITUC, it was actually the presidential candidate Svetlana Tikhanovskaya who won a landslide victory in the elections, by up to 64 per cent. Other main opposition candidates were harassed and not allowed to compete, and the whole election campaign was characterised by repression aimed at civil society and journalists, and the suppression of internet and media to prevent the flow of information.

The peaceful protests which broke out in response to the election were met with riot police, teargas, batons, rubber bullets, water cannons and grenades. Three thousand people were detained for participating in ‘unauthorised mass events’, including Nikolai Zimin, former chairman of the Belarusian Independent Trade Union, Maxim Sereda, chairman of the Independent Trade Union of Miners, and numerous journalists.

Along with the European trade union movement, EPSU calls on the Belarusian authorities to stop all violence, release imprisoned protestors, and bring all officials responsible for excessive force to justice. We also urge the Belarusian authorities to engage in dialogue with the opposition to launch a new electoral process, and ensure that internet connection is restored and journalists can freely inform the population about the situation in the country and outside.

The EU must now act on this, and convene an urgent EU Summit to assess the Belarusian authority’s actions and review the EU relations with Belarus.

For the joint statement of the ETUC and PERC

For the ITUC statement

For the response of the Council of Europe on the elections

Belarus and Council of Europe: joint statement by the Committee of Ministers Presidency, PACE President and Secretary General

For the protests of women against the election result (12 August)

Call from ETUC to demand support from ministers for the right to strike.

The International Committee for the Investigation of Torture in Belarus - a second interim report , it concerns the use of torture and inhuman treatment against detained citizens in the period from September to November 2020 .

(4 December 2013) The Ukrainian unions and including EPSU affiliates condemn the police violence against the protesters in Kiev and other cities. They protesters are exercising their rights to demonstrate, following the announcement of the Ukrainian government to not sign the Treaty on closer
Solidarity
Union Rights
Apr. 25, 2016
01-2007 epsucob@NEWS 9 January

The ETUC has welcomed a decision by the European Council to withdraw trade privileges from Belarus in response to the government's failure to respect trade union rights. In 2004 a commission of inquiry of the International Labour Organisation called on the Belarus government to stop its harassment of trade unions and respect the right to association and assembly but the government has failed to respond. ETUC General Secretary John Monks said that in contrast to its failure to act in the past, “In this case [the European council] has shown it is willing to take concrete action in support of
S
Apr. 25, 2016

(03 August 2007) EPSU and PSI have condemned the police break-in in the headquarters of the KSSH Confederation. The police broke in, destroyed property and kep union officials and staff out of the building. The police seeks to make the work of the trade union difficult. The trade union has protested
Solidarity
Union Rights