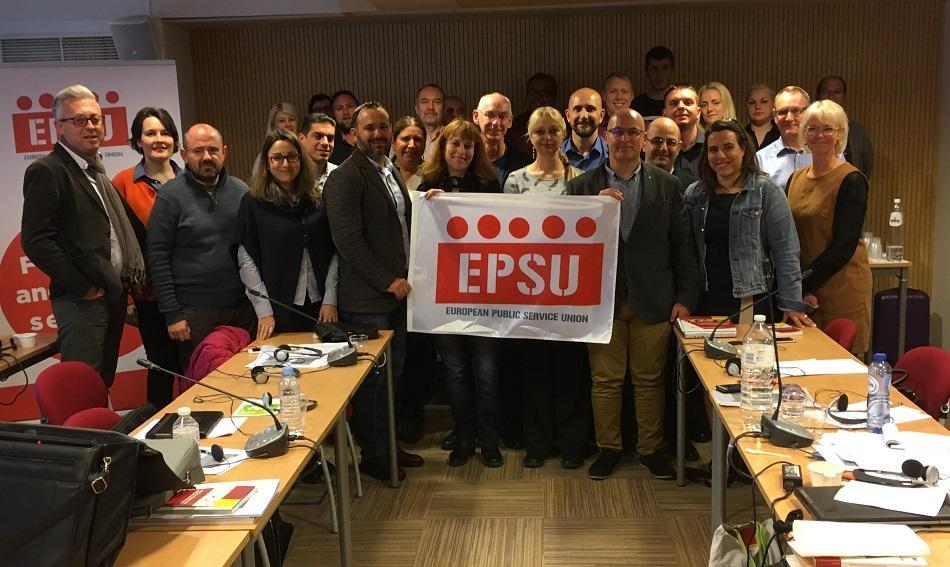 (11 May 2017) Europe’s austerity policies continue to have an extremely negative impact on employment conditions within the prison service sector, was the main message to emerge from the Quality Employment and Quality Public Services in the Prison Services Sector meeting, which has held in Brussels on the 10th of May, with 32 union representatives of prison staff from 14 European countries.

Following almost 10 years of imposed cuts in jobs and pay, within the European Union, the prison workers who look after the 630 000 or so prison inmates are close to breaking point. Numerous speakers at the Brussels event explained how ill-thought out austerity policies across EU Member States continue to have a massively destructive influence on those working in prisons and the inmates.

The meeting was part of a two-year EC-funded EPSU project examining quality employment and quality public services in light of the Commission’s relaunch of  EU-wide quality indicators. It  gives  trade unionists working in the prison services the opportunity to discuss and formulate definitions of quality employment in their sector and highlight priority issues. As well as defining the key aspects of what quality employment in the prison services should entail, the meeting set out to see how trade unions can play an integral part in ensuring that these definitions are put into effect.

Attendees also explored to what extent the quality of prison working environment has improved or not in recent years. Opening the conference, EPSU’s Richard Pond stressed that ‘it is important that those who work in prisons have a role in defining what quality employment looks like in their sector’. He went on to say, ‘as with many public services the debate on prison employment cannot just be about the number of jobs or the cost of service provision it has to take into consideration the quality of the public services provided and pay and conditions of those who work on the frontline within prisons’. Reinforcing collective bargaining systems also plays a major role in empowering prison staff and help them fulfil their rehabilitation role.

In the face of common challenges, EPSU believes that the issue of quality employment in prisons needs to be better addressed on a European level through raising awareness with governments and MEPs, as well as with the European Commission, not the least through the European Semester that sets out the EU’s macroeconomic framework.

Within public services generally and within the prison services sector in particular, austerity manifests itself in understaffing, greater out-sourcing of prison jobs, an increased use of short-term contracts, which fuels job insecurity and adds to psycho-social risks in the workplace. Prison services are an important focus for public services due to their links and essential partnerships with health care, probation and education  services and other elements of the justice system.

Nadja Salson EPSU’s Policy Officer presented a survey  titled: ‘Impact of austerity in prison services, a prison staff perspective’,  which was carried out in 2015 by the Labour Research Department for EPSU. She noted that ‘between 2008, when the crisis started, and 2013, the prison population has increased by 0.3% whilst prison staff fell by 5% in EEA countries. There are marked national variations, with the most severe job cuts in the UK and Latvia’.

Austerity has also failed to reduce prison overcrowding, a long-standing priority concern in countries such as Belgium, France, Portugal or England and Wales. This is a concern not only for staff and inmates but also for the Council of Europe which repeatedly recommends governments to reduce  pre-trial detention and imprisonment of vulnerable groups. As a result, the study also finds increased violence faced by prison staff, be that dealing with violence directed at them from prisoners or having to tackle the rise in violence among prisoners. It is clearly shown that understaffing is a major contribution to the upsurge in violence within the sector. Against this background the research shows that staff stress levels have increased significantly. Surprisingly, this has not  led to an increase of absenteeism as stressed staff are reluctant to take sick leave due to job insecurity or fears for the safety of colleagues or prisoners.

Salson reaffirmed that a zero-violence working environment is the very least that Europe’s prison staff should expect, in terms of a quality employment conditions. Whilst, trade unions play a major role in ensuring a safe and healthy workplace, anti-union policies undercut this role.

Researcher Monique Ramioul, from Leuven University, who is managing the two year research which is at the heart of the job and employment quality in prisons project, presented an outline . She noted that the issues of employment quality and well being within the prison services are integrally linked to employment conditions, the working environment, job content and having a voice and representation in relation to decision making within prison services. Preliminary findings confirm that austerity measures undermine all these elements which contribute to quality employment conditions with an increase in workloads, stress, burn-outs, less job satisfaction and greater job insecurity.

The research will go on to explore whether Europe will adopt a ‘low road strategy’ which limits imprisonment to deprivation and a loss of liberty and the role of prison officers to ‘guards’  or a ‘high road strategy’ where imprisonment is seen more as a welfare policy and prison officers as ‘rehabilitation’ workers focusing on the reintegration of prisoners into mainstream society.

In order to take the high road quality employment needs to be at the heart of Europe’s prison services sector, building upon examples where this has been the case for many years such as  Sweden or Norway with much better results in terms of reduced recidivism and reduced prison population.

Earlier this year the International Labour Organisation published report by a group of independent experts which is highly critical of the impact of industrial relations reforms in Romania. The
Collective Bargaining
Jun. 23, 2016

(June 2016) Executive summary : The report is based primarily on responses to an EPSU questionnaire received from 14 unions representing prison staff in 12 countries, supplemented by material from