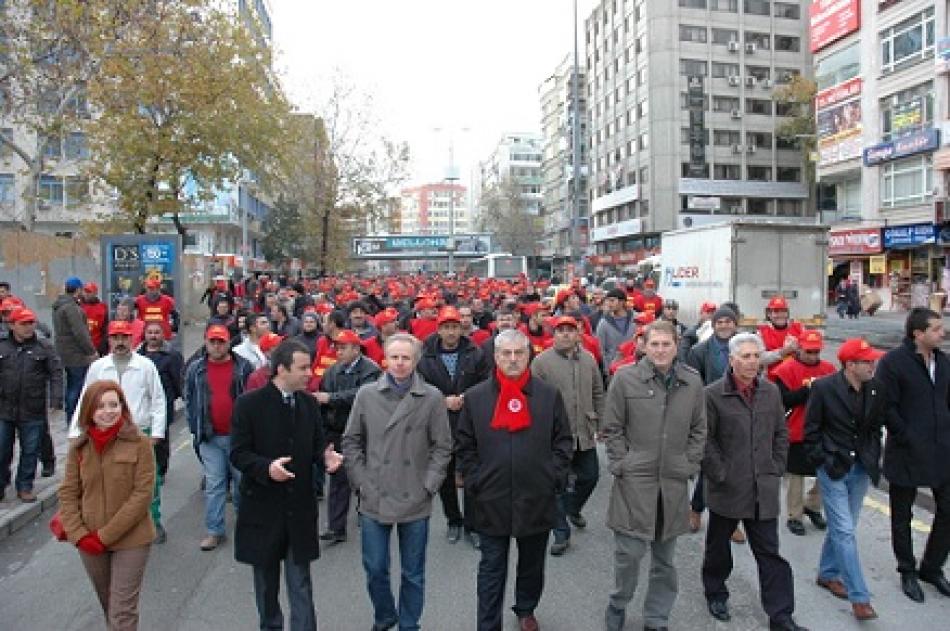 (13 December 2012) We were waiting outside in front of the Ankara court building. It was almost four thirty. The staff of the Court had ushered us out while the judges were deliberating what to do with the three colleagues of KESK, the Turkish confederation of public employees standing trial. The three colleagues were put in jail on 13 February 2012 for their union activity. They were organizing events in preparation of Women’s Day on 8 March. The three (Guler Elveren of Tum-Bel-Sen, the municipal workers union,
Bedriye Yorgun of SES->http://www.ses.org.tr/index.php/haberler/genel-merkez/2823-keskl-tutuklu-kadinlarin-durumasi-baladi.html], the health and social services workers union and Guldane Erdogan of [Egitim-Sen->http://www.egitimsen.org.tr/genel/bizden_detay.php?kod=18255&sube=0], the education union) had [faced the judges before on 4 October when I had been here last.

They had been arrested together with 12 other female trade union leaders of which nine were held in prison amongst whom six were released on that 4 October. Suddenly we heard loud cheers and an outburst of joy coming from the 15 and friends and family that had lingered on in the hall way. And then the mobile phones rang and people stormed outside to tell the good news: our three comrades were released. This outcome is the culmination of many events during the day and a long campaign of the KESK unions, Turkish women’s organisations and many other sympathizers and allies since the arrests in February.

That long day started when I bumped into my Swedish colleague Torgny of TCO early that morning. He had arrived late that night. Some sort of generator had woken us both up several times during the night, a terrible noise that subsided after 15 minutes but had kept him awake. We had been in contact since our last visit in October, exchanging information on the Turkish labour situation, the KESK trial and the new labour legislation that is so problematic for workers as it makes it harder to organise themselves. He was on his way to the Swedish embassy to brief them on his views and seek support. As the released colleagues would later be telling, it is important that the EU delegation and embassies continued to monitor the trials and even visit the prisoners. We were both part of the international delegation that would attend the hearing. Other colleagues that I met over breakfast were from the German education union (GEW) and the French teachers union (SNES-FSU). Its President was also vice-president of ETUCE, a sister Federation of EPSU. We talked about the result of our discussions the evening before when we had dinner with the colleagues of KESK and Egitim-Sen. Their lawyer briefed us on what we could expect at the trial. We had discussed a short statement that the colleagues would finalize after breakfast. The statement also committed to continue the pressure and struggle for the release of jailed trade unionists.

Apart from the 15 facing these hearings, another group was arrested in June organized by the ILO and European Commission. While comrade Lami was released, Osman and many others were kept in jail. The European Commission had protested against their detention with Commissioner Fūle arguing “The legal framework on terrorism and organised crime leads to recurring infringements of the right to liberty and security, the right to a fair trial and the freedom of expression, of assembly and association, and it needs to be amended as soon as possible.” As I had to leave I signed the statement later that afternoon.

I was picked up by Ozgur Doruk working for Yol-Is and the EPSU/PSI coordinator in Turkey as well as colleagues of GENEL-Is. We were joining a demonstration of municipality workers.

up
609 users have voted, including you.
Policies:
Union Rights

(11 April 2013) The outcome of the trial hearing on the detained trade union colleagues of KESK was positive: those in jail were all released. There will be no restrictions on their travel.
Solidarity
Union Rights
Jan. 17, 2012