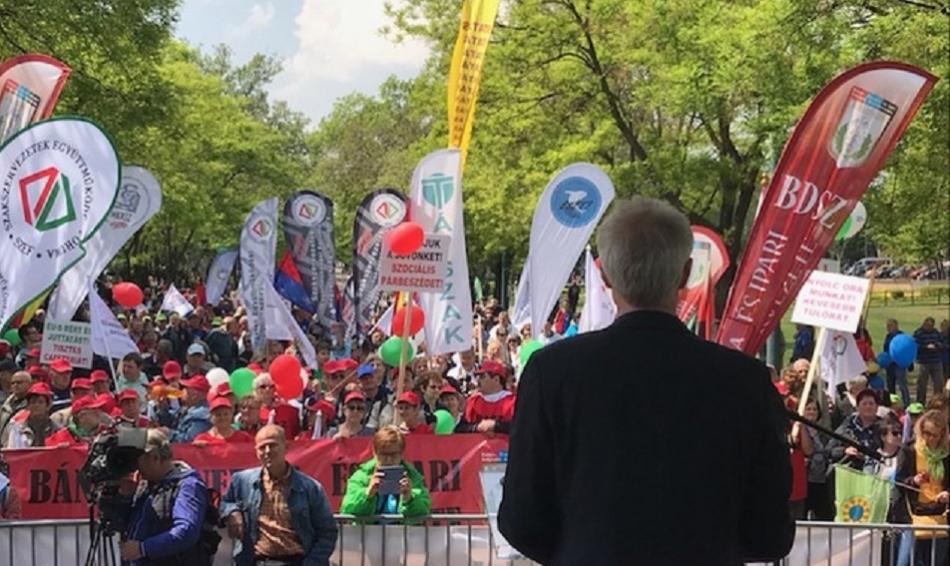 (2 May 2019) Squares, parks and streets filled with workers and union members across Europe and beyond this first of May. In many rallies demands for higher pay, stronger collective bargaining, more equality, public investment in public services and just transitions were voiced. Speakers looked forward to the European elections 23-26 May underlining the importance of voting and supporting parties that agree to the union demands, democracy and social justice for all in our societies.

The EPSU General Secretary joined the first of May demo in Budapest. He expressed solidarity with the public service workers. 10 unions have set up a strike committee and are demanding substantial wage increases. Many workers have not had a pay increase for many years. The unions seek negotiations with the government but it is delaying and playing games rather than meet the demands of the workers. He spoke to the crowd supporting the resistance against the socalled slave laws. These were imposed on workers by the government and make it easier for employers to force workers to work overtime. The European elections are a chance for us to speak out against the nationalists and to set out our agenda for A Fair Europe. To make progress, we need more European cooperation in our movement, and more progressive voices in Parliament, Commission and Council.

The demonstration took place 1 May 2019, Budapest. Apart from the EPSU General Secretary, ETUC confederal secretary Thiebault Weber, the leaders of the confederations of MASZ, ESZT and SZEF as well as leaders of the Hungarian affiliates joined the March. (BDDSZ-childcare, HVDSZ2000-municipal services, EVDSZSZ-electricity, KKDSZ-culture). After the demo several discussions were organized with the public and the unions.

On International Workers’ Day, or May Day, we recall those killed during actions in 1886 in the US. We remember the actions and strikes to achieve shorter working hours and a shorter working week. We can be proud of our achievements and look forward to the future. The day is celebrated across the world. A Hungarian teachers union used it to announce strike action end of May. Elsewhere the Brazilian unions had a historic joint march to expose the government plans of the extreme right President; millions joined in various places in India. Protesters were arrested in France, Russia and Turkey.

1st of May message from EPSU General Secretary

1st of May - fighting for our Europe

Dear Colleagues, (25 April 2014) This coming 1 May workers and their trade unions will march for a social Europe, a Europe where we can live in peace. We want a peaceful solution for Ukraine; we also want that the Turkish trade unionists can peacefully gather on Taksim Square to celebrate Mayday in
Jul. 28, 2011

Brussels 28 July 2011 – Civil society organisations, collectives and trade unions [1] gather around public water fountains today in Brussels to celebrate the one-year anniversary of the UN General Assembly resolution on the human right to water. 2011 has been an important year for public water in
Water