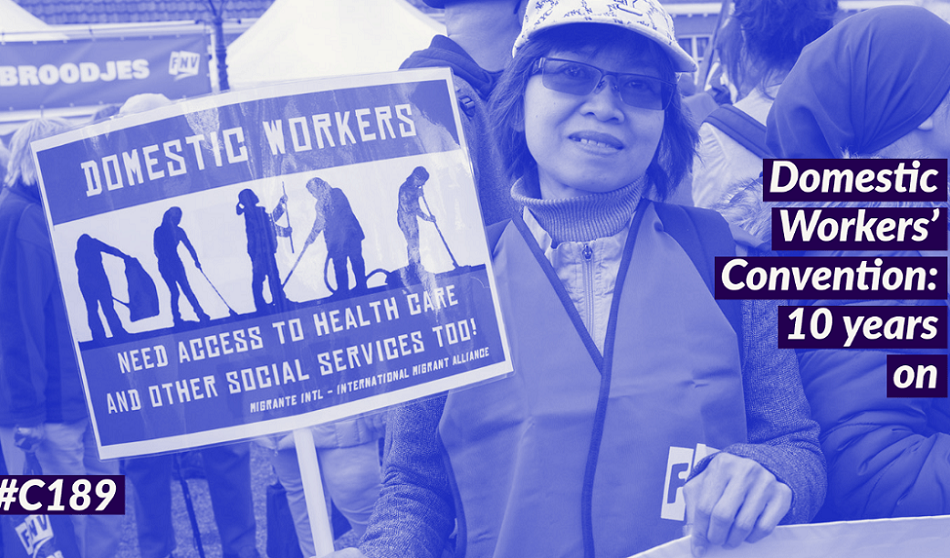 (30 June 2021) Following years of struggle of domestic workers and the unions, the ILO concluded a convention for domestic workers in 2011. We are now 10 years later and only 9 EU countries have ratified it, and 10 in Europe. Belgium, Finland, Germany, Ireland, Italy, Portugal, Slovenia, Sweden and Switserland have implemented the convention in their national legislation. It becomes operational in May 2022 in Malta. EPSU supports calls on EU and other European countries’ governments to ratifying the Convention. It would mean that countries ensure domestic workers have the same rights and freedoms as other workers. There are countries where national laws exclude domestic workers from minimum employment standards. In particular, workers’ freedom of association and collective bargaining rights would be strengthened.

A broad group of unions and others organized a conference to mark the anniversary. A range of subjects was discussed to improve the situation of the approximately 9.5 million domestic workers in the 27 EU member states, 90% of which are women. “Among them, 6.3 million are declared and at least 3.1 million are working undeclared. Among the 6,3 million declared domestic workers, nearly 2 million of them are excluded from the same labour rights and social protection as other workers in their respective country. In Europe, a significant proportion of domestic work is carried out by migrants. In 2013, the ILO estimated that 54.6% of domestic workers in Northern, Southern and Western Europe were migrant workers, a majority of whom are migrant women.”

A large number of domestic workers provide care including life-in-carers and homecarers. And many are doing this in crossborder situations. They experienced the full impact of the pandemic, with many being left stranded and without income. And home carers were very vulnerable in the first wave of the pandemic as personal protective equipment was lacking and health and safety protocols were not in place.

The EPSU General Secretary participated in a panel. He underlined that domestic / live-in  care workers fill a gap that state’s have created with underfunding of public services , privatization and austerity measures. Domestic care workers are vulnerable to shocks like the pandemic. Participants in the seminar underlined that care and affordability were key issues and he underlined that the role of the state and of municipalities including in funding and provision of services needs to be strengthened. EPSU’s demands for improved working conditions, collective bargaining, adequate levels of staffing, and increased investment in the broad care sector were included in the Long-Term Care report of the Commission and the EU Social Protection Committee and endorsed by the EU Council.   EPSU supports the concerns of organisations like PICUM regarding the need for regularization of migrant domestic workers and the Global Federation for Domestic workers regarding the risks of exploitation especially migrant workers. Domestic workers should be covered by existing labour legislation like on working time, health and safety, equality, transparent and predictable working conditions and minimum wage legislation including the forthcoming European one. All speakers agreed domestic workers should be covered by collective agreements. The European Labour Authority should be more active in protecting the rights of domestic care workers especially in cross-border situations.

The EPSU representative made the link with the European Pillar of Social Rights. It states that everyone has the right to affordable long term care services of good quality. The expected publication of the action plan on LTC next year should include how the Commission will improve working conditions for live-in-care workers. It should address the gender segregation, more than 90 % of domestic workers are women. EPSU supports that employers that get public funding through contracts and in other forms (public procurement) should bargaining with the workers and the unions and have collective agreements, have plans to reduce CO2 emissions and be transparent about where and how much they pay taxes. Live – in care arrangements that are close to modern slavery need to be eliminated.  To do so governments need to invest in public services and in long-term and other care services

Previous work of EPSU on domestic care workers and the ILO Convention.

EPSU sister Federations UNI-Europa and EFFAT are part of the group. EFFAT published Domestic Workers in Europe: Getting the Recognition they Deserve’

Enforcement of ILO Convention 189 on Decent Work for Domestic Workers

(14 October 2013) It's taken decades of struggle, but on 5 September 2013 domestic workers are finally given the same rights as other workers with the coming into force of
Union Rights
Apr. 04, 2011

EPSU calls for the ratification of the ILO Domestic Workers Convention

(4 April 2011) The European Federation of Public Services Unions is sending this letter of support about the ILO Domestic workers Convention. We encourage all affiliates to use it to
Migration
Nov. 25, 2011
2011 November [email protected] 19 Trade Union Rights

The key International Labour Conventions are no.87 on freedom of association and 98 on collective bargaining. A report for UNISON by the International Centre for Trade Union Rights (ICTUR) argues that both of these should apply broadly to the vast majority of public service workers. If there are any doubts about public sector workers’ rights to collective bargaining then Convention 151 on labour relations in the public sector can be used to challenge any restrictions that governments try to impose. While Conventions 87 and 98 have been ratified by most countries, ratification of 151 is more