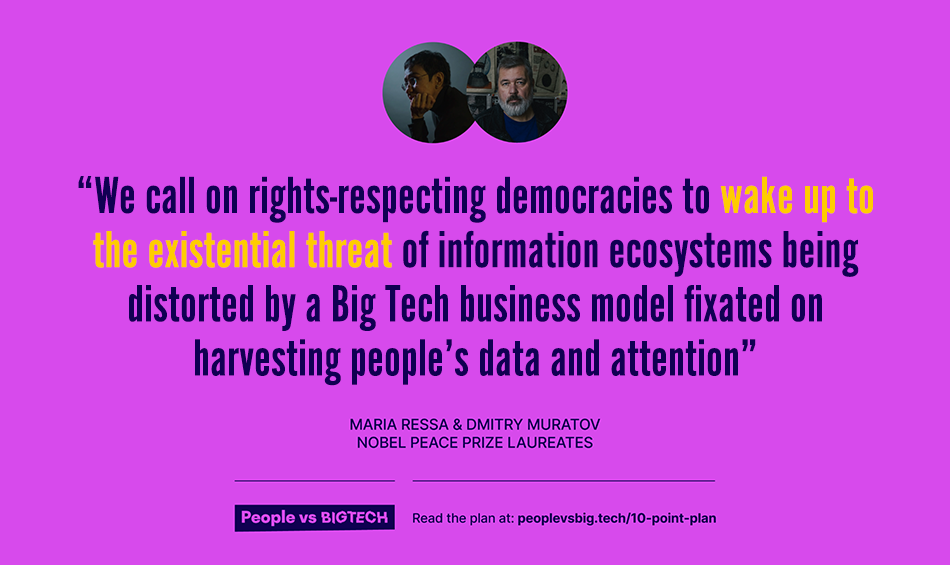 (2 September 2022) EPSU and a large number of organisations have endorsed a 10-point plan to tackle media disinformation and address the information crisis. The plan builds on the ‘People’s Declaration' from 2021 and which was supported by EPSU.

The plan sets out 10 key demands, including

The plan underlines the need for technology to be built in service of humanity and for global public space protects human rights above profits.  Today, the huge potential of technology to advance our societies has been undermined by the business model and design of the dominant online platforms.  The plan reminds everyone that true human progress comes from harnessing technology to advance rights and freedoms for all, not sacrificing them for the wealth and power of a few.

(*) Journalists Maria Ressa and Dmitry Muratov. Were awarded the prize in 2021 for their courageous fight for freedom of expression in the Philippines and in Russia.

(**) Astroturfing is the deceptive practice of presenting an orchestrated marketing or public relations campaign in the guise of unsolicited comments from members of the public.

(7 October 2016) ETUFs informal network on digitialization met in EPSU offices to exchange view on following topics:The need to regulate on right to disconnect through collective bargaining and other
Digitalisation
Feb. 04, 2009
03 epsucob@NEWS February 2009

The European Commission argues that its latest Industrial relations in Europe report highlights how social dialogue can play a crucial role in tackling the current economic crisis. Good industrial relations can help workers and employers adjust to and manage change effectively. The report also looks at the impact of collective bargaining on equal pay and low pay. It says that the empirical evidence suggests that, with all other variables constant, where trade union membership is 10% higher, wage inequality is around 2% lower. An increase in collective bargaining coverage of 10% is associated